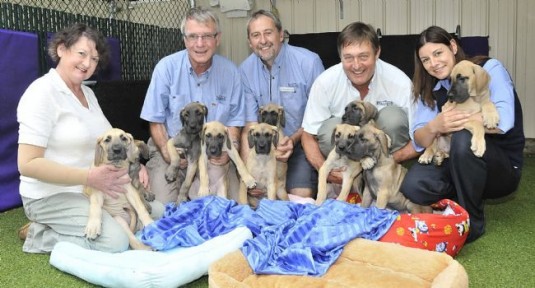 A veterinary clinic in Australia is celebrating the arrival of ten new Great Dane puppies – conceived via in vitro fertilization (IVF) with dog sperm that was frozen in 1989.

Bellarine Veterinary Practice Dr David Hopkins explained that a client had frozen and stored sperm from one of her prized great danes, Liebendane Armstrong, in 1989. Two decades later, that client, Deidre McRae,  requested that the sperm be used to spawn a new litter of pups. McRae  said she was “over the moon” with the results. “I was hoping for one or even two, but to have 10 is just unbelievable,” she said of the healthy, happy eight week old litter.

Dr Hopkins notes that while breeding dogs using preserved sperm is not new technology, it is highly unusual for semen frozen for so long to produce such large, healthy litters.  Hopkins said the technology was more likely to be used to breed professional bomb and drug detection dogs for Australian Customs.

McRae said that while she plans to sell some of the pups, she is planning on keeping a number of them as show dogs.