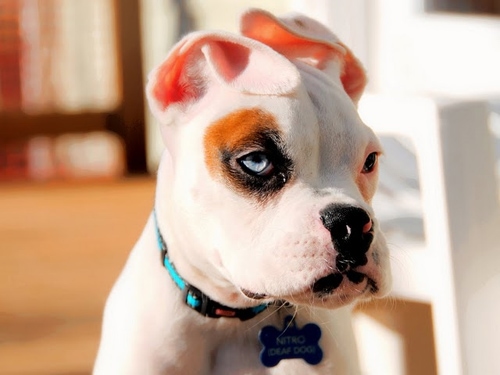 Unwanted and abandoned at a shelter when he was just eight weeks old, deaf boxer puppy Nitro is loving life in his new home, and is making big waves in his community as he and his new owner demonstrate the remarkable potential of deaf dogs.

The eight month old pure bred pup is learning American Sign Language, and has mastered commands for for sit, stay, down, turn-around and shake, among others. His owner, Christina Lee, is also taking a crash course in ASL in order to communicate more effectively with Nitro. Judging by their mutual successes, it’s working wonders.

Allow me to pause and admit to a personal bias. We rescued a deaf puppy many years ago, and he was an amazing soul. Living with a deaf dog is different, in that verbal communication is supplanted by sign and body language. The first and best thing you can train a deaf dog is to stay focused on you so that you may issue commands in sign language, and there is a closeness that comes from the training process with a deaf dog that’s hard to describe. They are truly special. 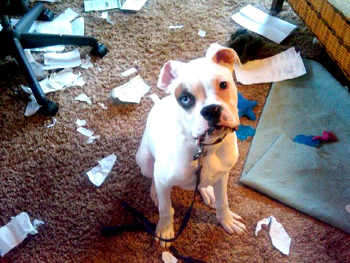 When I happened upon a local news report about Nitro I couldn’t wait to find out more about him. I wanted to bring his story to a larger audience, to tell anyone who would listen what great pets deaf dogs make. Something about Christina Lee had sounded familiar to me as I watched a video of she and Nitro working together, but I couldn’t quite figure out why. Then, as I was working on a draft for an article a new e-mail landed in my inbox, and I could not have been more pleasantly surprised.

I want to thank you for hosting the Saturday Pet Blogger Hop each week. Lexi and I enjoy sharing all the fun we have together. This week our local news station did a news story on my deaf white boxer puppy Nitro. He just turned 8 months old and he is a level 4 in training even though he is deaf. I have studied all of his commands on aslpro.com which helps me use ASL signs to teach him commands. Our news station did a great job capturing his spirit. I hope you enjoy their video.

It’s a small world. Of course Christina’s name was familiar – we’ve been connected in blogging circles for some time now! In my haste to collect details and assemble a post about Nitro my powers of observation were compromised. The good news is that you won’t have to rely on my fuzzy memory for future updates about Nitro, because now you can follow his exploits on The World According to Lexi, Christina’s blog. In a phone conversation last evening Christina joked that she may have to change her blog name because it’s turning into the Nitro show, but something tells me Lexi doesn’t mind letting him hog the spotlight a little.   🙂

Ok, I’ve rambled long enough, let’s get a closer look at this beautiful boy and the story that I couldn’t wait to share.

Lee plans to train Nitro to work as a therapy dog. She says he’s definitely smart enough, and given his smarts and sweet disposition, it’s hard to imagine a better candidate. “He’s funny. He’s really funny,” Lee said. “He has a lot of personality, so it’s a shame somebody didn’t see it.”

Christina, the right person saw it. Thank you for giving him a loving, forever home. Now could you hurry up and post another Nitro update? 😉