Tom McPhee, Executive Director of World Animal Awareness Society and award winning Director of the film, An American Opera, honored Life With Dogs with an interview about his American Strays project and the upcoming American Strays Canine Survey and Treasure Hunt.

Tom McPhee has been around the world filming human-animal interactions, especially in stressful situations or disasters, beginning with the aftermath of Katrina (as seen in An American Opera) and, most recently, in the aftermath of the Fukushima incident.

He is now focusing many of his efforts on the American Strays project in Detroit, Michigan. It is this project that I interviewed him about, although I would highly recommend watching An American Opera if you have not already.

So, tell me a bit about the problem in Detroit and how it came about. Why did you choose Detroit?

“Quite simply, we chose Detroit because it is in our backyard (of World Animal Awareness Society)… The city of Detroit actually wanted to curtail any sort of reality based television and they were not keen on attaching cameras to the collars of dogs. So, we sat down and talked about writing some letters to the city….

There was another group that was turned down in doing similar work and they began to be ticked off at the city. So, they decided to go rogue and get involved in rescue work…They began to push the idea that the city of Detroit had around 50,000 strays…So we thought this was the perfect opportunity to study the issue…We pulled in the Michigan Humane Society and Michigan Anti-cruelty Society. We also reached out to Michigan State University and they designed a way to count the dogs in a scientific way…

So this other group pressed the number that 50,000 dogs are roaming Detroit…We thought this odd, having roamed the world studying human animal interactions, this seemed to be a large number…”

So what is the American Strays Canine Survey and Treasure Hunt and how will this benefit strays in Detroit? Is it like a census? 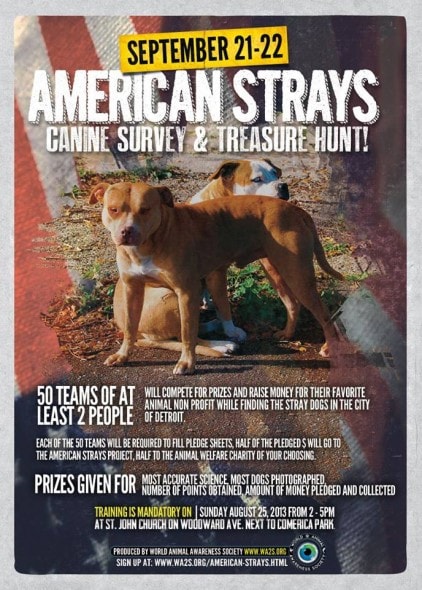 “Yes, it is sort of like a census but we can’t call it a census because we are not literally counting every animal everywhere…Having said that, we have interacted with the most prominent organizations.  We were in York, United Kingdom for the first International Conference on Dog Population Management last year and they were trying to get this sort of information included in actual censuses…

The Treasure Hunt side of things is to add a fun component because the work is tedious so the workers find bonuses and rewards. We use digital tracking and collect data and people get rated and win prizes…”

How are you going to cover all of Detroit? Is it really possible?

“Detroit is massive…bigger than San Francisco and many other big cities and there are many abandoned structures, in many instances with animals left behind.

So, we will be going street to street… What took us 2.5 years to get a number will now take us a couple of days now. We will have about 50 teams of 2 people paying attention to a 3 square mile area for 2 days, so thousands of sample points…

Why is the problem in Detroit so severe and what can be done?

“The problem is very similar to the abandoned houses open to the elements that you see in Detroit. Often when you have a house open to elements you find water is running and just flowing out of control from the faucet…The city is in distress, and many are turning to the cottage industry of “making dogs” and people are not educated….So, the faucet is just flowing uncontrolled…Education is the top issue to begin to stem the flow and then spay and neuter…

We aren’t passing judgment either because in all the places we go to, it’s culturally connected. So, we have to go back to the beginning.

People say we should just pick the dogs up but it’s not that simple. Some dogs do belong to someone and others are generational strays…In terms of what the organizations authorized to pick up animals do, they only deal with animals in distress because of the sheer number of animals in Detroit…

Some shelters have horrendous euthanasia rates and are overcrowded….I don’t know how you could address some of the back end of the problem without addressing the front end…American Strays Canine Survey and Treasure Hunt is designed to step back and map out solutions with the stakeholders involved…

This is kind of different thinking. In the rescue community there is a lot of knee jerk reactions, like ‘go solve it’…However, the problem changes each 10 years.”

We are a media non-profit, so we are not in the rescue business and not in politics…If we look at the issues, we must focus on the players. We want to continue to build this baseline knowledge…So, it’s not about the number

Are you focused only on Detroit?

“No, Detroit is a template and by 2015 it will be a national program. We have modeled some of what we are doing after what the Audubon society does with their annual bird count.”

If many families in Detroit can hardly feed themselves, what can they do for their dog? What would you tell a family in poverty to do so that the situation doesn’t result in neglect and ultimately a stray, especially if the family genuinely loves the dog and doesn’t want to give it to a shelter where it may be euthanized?

“This is a great question and many people forget that some of these animals are loved by families…We are currently working with the National Museum for Animals in Society in LA and they put together various exhibits. They are working on one-“My Dog is My Home”-focusing on the idea that homeless people should be able to have a pet…Some people have a hard time taking care of a pet but still want to keep the animal. There are a couple of reasons, such as for companionship or security…

Regarding Detroit, the main problem is that there is some baseline knowledge that has not been built into these neighborhoods. I have been around the world and if Detroit were measured by the standards that we measure countries, it could be measured as a third world country, mostly because of a lack of education…

We want to show what is taking place and not judge…We are going to tell a story about humans and animals and the things that take place…People that live in that city don’t understand the responsibilities along with keeping animals though they may care about them. “

What are the different kinds of strays? How do you differentiate between a stray and a pet that just wandered too far from home or is not well kept?

“We don’t-it’s the American Strays Canine Survey and we are literally trying to count all the dogs that we see. It’s an initial baseline and we are also taking photos of the animals and using a database to later identity the dog…There are many ways to qualify them. L=leash and C=collar…So instead of saying stray or feral or wild, if we see one in distress it automatically gets called in. We have specific designations with what we see but we don’t make a determination if it’s community owned, a stray, etc. As we improve, we will better define these things.”

So, you created a film series highlighting problems and solutions. Tell me a bit about this. 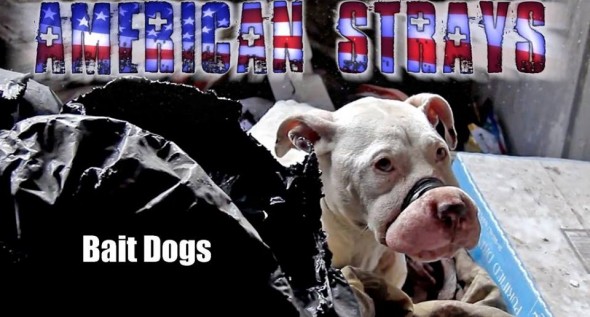 “There are two things we are doing from a visual perspective: One, we are highlighting how people interact with problems and solutions from people’s perspectives by showing 5-10 minute scenarios encompassing this. That’s the first part and that outreach is to connect with the community and let them see what is going on and then communicate this to the outside world to help them connect with what is going on here, to facilitate some knowledge transfer in an entertaining way…There is also a focus on gaining attention and talking about hardcore issues.

Second, we are also working on a feature, which is very different. This is from the animals’ perspective…We are figuring out ways to get close and tell their intimate stories and what they are going through. This part is all about the dogs-no people-just the dogs. We want to draw this emotional connection between the people and the rest of the world so that they care…because what is happening with people leaving them, they become outcasts…and people don’t have that responsible guardian sense and they discard them like items in a house…

Then the mentality is that these dogs are lost, abandoned souls and literally outcasts. So, people either abuse them or just don’t pay attention to them and neglect them as outcasts…”

How did you become interested in this sort of work and in animals?

“I was in New Orleans in 2005 shortly after Katrina and everything changed…This is when I became interested in this. After they had evacuated people, thousands of animals were left and rescue groups descended on New Orleans.

My film, An American Opera (www.anamericanopera.com ) is about this situation and what took place, the major players and how it happened. There is even footage of police officers just gunning down dogs in the streets.

This changed my whole focus and pulled me into the animal realm. I saw my entire future in a millisecond. From that time, I went on tour with the film and supported animal rescues around the country and it was some of those publisher partners that said they would love to support me more and I should start a non-profit. So I did and we launched in 2010.

We want to do something very unique. We are looking to cover the whole thing like ESPN does with sports and do lots of different programs…”

We are also building something called a “Rescue Squad” and although we don’t do the rescue work, we look for people who would be out there with our film crew…We will go to disaster zones around the world and deploy within 6-12 hours of the situation.”

You would go to these disaster zones and focus on animal rescue work?

“Not only animals. Our focus is on humans and animals, never just animals. We always focus on those places where there is a contemporary human-animal collision taking place…whether it is puppy mills, zoos, or the aftermath of a disaster…We think we can see our evolution because most of our psychology is stripped away in these situations.”

The World Animal Awareness Society is a non-profit organization dedicated to observing human evolutionary arcs at animal intersections. They do this by using film and television to bring awareness to situations and to, in their own words, “focus a lens on a wide spectrum of interactions at the human-animal intersection and curate a detailed filmed archive of behaviors in expectation of observing human evolution”. They have several ongoing projects, including emergency disaster response and the American Strays Project.

Another part of the American Strays project is the creation of a film series that focuses on the dogs and people who love them in the decaying city of Detroit. The first season’s 16 episodes highlighted often difficult scenarios in which either ignorance or clashing resulted in neglect or in dramatic scenarios that are sometimes graphic and hard to watch.

The upcoming second season’s premier will be on Tuesday, September 17th. This season will focus more on the good work that is being done on behalf of dogs by rescue workers and other dog lovers. It will be more positive and uplifting in comparison to the first season’s graphic but realistic portrayal of life in the poor neighborhoods of Detroit.

You can view the 16 episodes from season 1 on the American Strays website by clicking here.