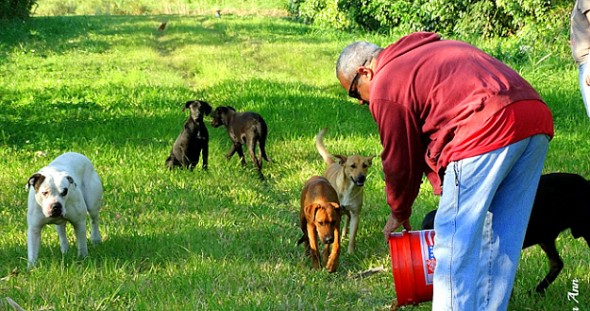 Eddy Alvarez has patrolled the edge of the Everglades, Redlands, Homestead area for the past 20 years, feeding abandoned dogs, cats, birds, etc on a daily basis. Eddy feeds at least 50 – 60 dogs on any given day. He has been doing this on his own, most of the time paying for vetting out of his own pocket and getting scraps from restaurants so the dogs would not go hungry.  It wasn’t until about two years ago, that while Eddy was feeding the dogs a car stopped to ask what he was doing.  At that point Eddy explained to her that he would feed homeless, abandoned dogs daily.

This person was Jennifer Bird from Fur Kids in Pennsylvania, and she helped Eddy get some exposure and created a Facebook page for him.  Eddy does not have too many volunteers, but has managed to save thousands of dogs.  In the past year he has received help from Michael Sunberg and Anna Bailey in setting up fundraisers, food drives, etc. and Susan Stubbs, who takes care of the adoptions and administrative duties so Eddy can concentrate on the dogs.

Although he has always had a passion and special connection with animals, it was after Hurricane Andrew that Eddy started feeding and rescuing animals in the Homestead/Redlands/Everglades area on a daily basis.  This included dogs, cats, monkeys, birds, horses, pigs and just about any living thing, including humans, that were affected by the hurricane.  Since then, Eddy has been nonstop helping all animals in need and feeding and clothing the homeless in that area.  Sadly, animals are still dumped on a daily basis.

Eddy’s K-9 Rescue is a 501(C)3 nonprofit organization committed to the rescue and placement of unwanted or abandoned animals. Based in Florida, Eddy has helped hundreds of dogs by bringing them out of the dangerous areas in the Everglades, vetting, nurturing, rehabilitating and finding them loving forever homes. These are wonderful, loving animals that often only need love, compassion and a little understanding or training to make them an incredibly awesome family member and best friend. Because there are so many abandoned dogs in the Everglades, mostly big dogs, we are limited in how many can be brought in. Therefore, the small dogs, pregnant/with puppies or dogs that are hurt or in immediate danger are brought in first as they will not survive in the wild. Most of the dogs we take in are malnourished, ill, injured or been abused, so you can imagine vet expenses are quite expensive. Eddy tries to vet them himself by giving them de-wormer, flea and tick medication, etc. and trying to keep them as healthy as possible until it’s their turn to be brought in.

PLEASE SHAREThese 3 babies desperately need a home!!!! All very sweet. Lobo, the Shepard is good with cats, dogs and…

All of Eddy’s rescues are very special to him, but one rescue that Eddy always talks about is Tarzan.  Eddy would go out to feed him at nights.  For weeks he could never see him, but Eddy knew he was out there in the field, as he could see his eyes at night.  Not knowing that Tarzan was injured, Eddy thought Tarzan was just afraid.  Slowly in the course of about three weeks, Eddy started working his way towards him, finally being able to see him, and that’s when he noticed Tarzan was injured.  He had a broken leg, gashes all over, scars…. it was later that Eddy found out from nearby farmers that Tarzan had been hit by a car.  They thought he had died, but he had been hiding in this field for over three weeks.  Eddy was finally able to earn Tarzan’s trust and rescue him.  He is now living in a wonderful, loving home.  If it wasn’t for Eddy being out there and not giving up on Tarzan, he would not have survived.

Not all have a happy ending, but Eddy never gives up and never forgets about a dog.  One of the hardest and saddest cases Eddy has had to deal with is a three-legged female he has not been able to rescue.  During a rescue attempt when he first saw this dog, she jumped in a canal and when she got to the other side she had her leg chewed off by an alligator, which is why she is three-legged.  She disappeared and Eddy thought she was dead.  About six months later he saw her again, three-legged now and with a litter of six puppies crossing the street…. right in front of Eddy all six of her puppies were hit and killed instantly by a garbage truck.  As Eddy watched in disbelief that this had just happened in front of him, she came back, got all six of her puppies and stayed with them for two days… then disappeared again.

She has been out there for about four years now and the closest Eddy has been able to get to her is about 100 yards.  A few months ago we saw her again…. Eddy left food out for her and we have not seen her again.  In the four years she’s been out there she has lost about three litters.  Eddy has set up traps for her but she does not fall for them.  It’s been four years and every few months she shows up…. Eddy never stops looking for her.  He will not give up on her but it’s been hard knowing she’s out there and what she has already gone through… but she is definitely a survivor!

A lot of hard work goes into rescuing these babies and putting them into the right homes. Eddy has made this possible and he isn’t stopping now. As many of these fur babies as he has already rescued in the past, we can only look forward to bringing home all the ones that are still out there. This is where we need your help.

In order to have the space necessary to continue to rescue as many of these fur babies as we do, we are in need of donations. Eddy’s K-9 Rescue would like to open a sanctuary; one that will house up to fifty dogs, fifty cats, horses, birds, reptiles, cows, chickens, goats and more. Eddy Alvarez will donate the land, but will still need funds for infrastructure, permits, plumbing, and electricians. We will also need architects, and engineers, therefore if you or someone you know would like to offer the services for plans pro bono please contact us. We will also need donations of supplies and materials, as well as monetary donations.

Eddy’s K-9 Rescue’s intentions behind this sanctuary is to be able to have a free-roaming facility in which these fur babies will only be caged in extreme situations. Our doors will be open to all types of animals, as our mission is to rescue and find homes for all those who do not have a place or family to call their own.

We desperately need animal lovers for assistance with feedings, foster care and transport. Eddy’s K-9 Rescue houses as many as we can, but we are limited in space. It is painful to turn away a pet in need because we know what its fate will most likely be!

These lives are precious…We believe that if an animal has the courage to survive the abuse and neglect, it deserves to be medically treated and live its remaining years (no matter how old) in a loving home.

Here are our donation options:

iGive sign-up – this gives us a donation when you shop. You do not have to do anything, just sign up and it’s automatic. There is no charge to you. Please CLICK HERE.

There is also an AMAZON WISHLIST, which helps provide transportation and cleaning supplies.

There will also be a benefit in Fort Lauderdale on Wednesday, August 26th, called Meatballs & Martinis for the Mutts, which will be donating proceeds to Eddy’s cause.  For more information, check out the FACEBOOK EVENT PAGE. 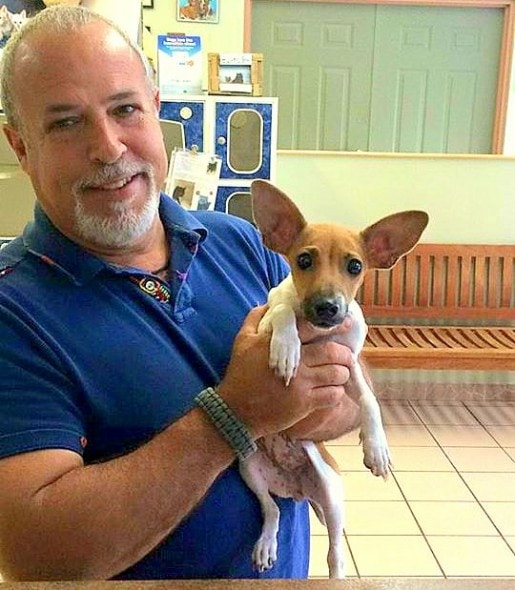 For more information, and to see the rescues and animals that need adopting, give his Facebook page a like.