The internet is buzzing with reports of possible animal abuse taking place on the set of the upcoming film A Dog’s Purpose.  A video of the filming of the movie has surfaced showing someone trying to put German shepherd Hercules into some turbulent water, and he is obviously terrified.  Film crews stand there watching as the dog makes a desperate bid to stay dry.

“Well, the water is warm at least,” you can hear someone say.

The shoot was taking place outside of Winnipeg, Canada in November of 2015.  In the video, you can see a trainer repeatedly attempt to put Hercules into a pool able to simulate a very turbulent river.  The dog clearly wants no part of the rushing water, and given the look of it, it’s not hard to see why.

Eventually, the trainer gets the dog to go into the water, but he is pulled right back out.  The video is then edited to show another take where the current has forced Hercules’ head under water for a few seconds.  Crew members in the water specifically to come to his aid in a hurry if anything goes awry rush to his assistance, but the clip ends there, provoking speculation that Hercules has drowned. 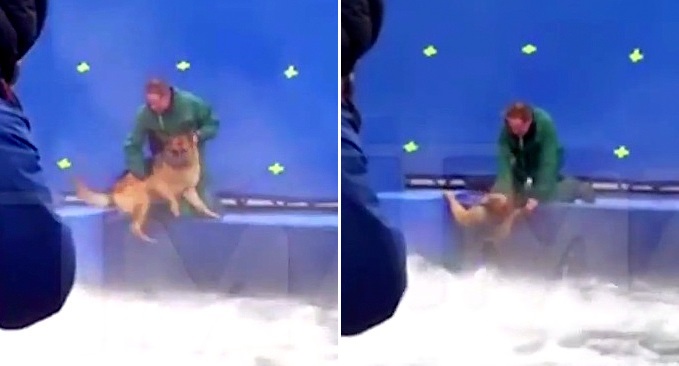 “There were several days of rehearsal of the water scenes to ensure Hercules was comfortable with all of his stunts,” said a joint statement from Amblin Entertainment and Universal Pictures.  “On the day of this shoot, Hercules did not want to perform the stunt portrayed on the tape, so the Amblin production team did not proceed with filming that shot.”

The red carpet premiere and press junket for Saturday in Los Angeles has been canceled due to widespread cries to protest.

Director Lasse Hallstrom said on Twitter that he had not witnessed the events in the infamous footage, and that he was “very disturbed” by it.

“We were all committed to providing a loving, respectful and safe environment for all the animals in the film,” he continued.  “I have been a lifelong animal lover and A Dog’s Purpose is my third film about dogs.  The animals’ safety was of the utmost priority.

“I have been promised that a thorough investigation into this situation is underway and that any wrongdoing will be reported and punished.”

The team members responsible for the creation of this film are devoted animal lovers, and were just as horrified by the shot of that take as everyone else who saw it.  Producer Gavin Polone gave a thorough explanation of the situation, answering many questions, and also raising some, namely, why the person who secretly filmed the video waited over a year to release it if they were so concerned about animal welfare.

What do you think?  Cut and dry abuse case or major overreaction?