In one of the worst cases of animal abuse ever witnessed in the tri-county area, an emaciated pit bull mix found in Ridgeland, MS was saved just hours from death. 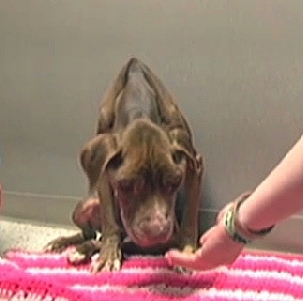 Mercy was found earlier this week, and even after a few days at the Briarwood Animal Hospital, the weakened dog is barely able to stand. When she does, the extent of her suffering is painfully obvious.

Animal advocate Chrissy Cheshire operates Cheshire Abbey and works with area animal rescuers. She has made a personal mission of saving a dog that many would have labeled a lost cause.

“It’s really the skinniest dog I’ve ever seen. She was freezing to death. I mean, she would have literally died. She was so cold because she was anemic, anemic from all of the flea bites and so skinny,” said Cheshire.

The man who found Mercy reported her to animal control as a stray. The state of Mississippi has recently added tougher felony animal abuse law to the books, but those involved in this case say they doubt anyone is likely to be charged.

Animal advocates are encouraged by the increased penalties for abuse, but say more still needs to be done to protect pets. “But it doesn’t truly protect the abuse that happens to animals, which this dog is a perfect example of the abuse that is out there. The people that were against it were fearful that it was going to effect livestock, chickens and cows and it doesn’t. It is specifically for dogs and cats,” said Pippa Jackson, Executive Director of Animal Rescue Fund.

Pippa and others plan to attend legislative sessions at the Capitol in January when the legislature reconvenes, with the objective of strengthening Mississippi’s relatively weak animal abuse laws. And while they carry out that mission, a team of devoted caretakers at the Briarwood Animal Hospital will continue their mission to save Mercy. It’s too early to say if she will make it, but if nothing else, the image of Mercy – an unwilling mascot in the war against animal abuse, struggling to rise and fighting to survive – will forever be emblazoned in the memories of those seeking to protect the welfare of Mississippi’s pet population.