I was slack-jawed as I watched this video of Buddy, a German Shepherd as he led an Alaska State Trooper through winding back roads to a fire at his residence. Best friend indeed. 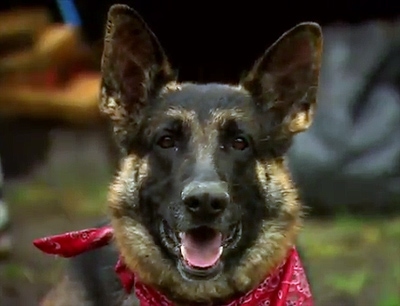 The Alaska State Troopers have issued the following press release:

German Shepherds were bred for intelligence to protect sheep flocks from predators. They are revered for their loyalty and renowned to be sensitive to people’s emotions. While a collie named Lassie may be best known as a dog hero for the saying “Lassie, go get help,” Buddy carried on the tradition set by German Shepherds Strongheart and Rin Tin Tin when he went to get help after his owners’ Caswell Lakes property caught on fire on April 4, 2010.

Like usual, Buddy was beside his human companion, Ben Heinrichs, who was working in the family’s shop. A heater ignited chemicals the 23-year-old was working with, giving Ben flash burns to his face. The flames quickly grew as Ben escaped the shop. However, Buddy was briefly entrapped inside the burning shed when Ben shut the shop door behind him to keep the flames from spreading. After extinguishing the flames on his body, Ben immediately realized his dog was still inside the shed and went back in to let Buddy out. After Buddy exited the shed, Ben said to him, “Buddy, we need to get help.”

Buddy headed for the woods, but not to hide as his owners expected the shy dog to do. Instead he ran to Caswell Loop Road where he eventually found help.

Alaska State Trooper Terrence Shanigan was struggling with finding the fire in the Caswell Lakes area outside Willow, which has approximately 75 miles of back roads. He had just received a frantic phone message calling for help left by neighbors of the Heinrichs who are members of the local neighborhood watch program. Shanigan’s global positioning device froze up on him and dispatch was trying to pinpoint the address among the maze of neighborhood back roads. He was planning on taking a turn that would send him the long way around the neighborhood when Buddy appeared as a shadow at the edge of Shanigan’s moose lights on his patrol vehicle. When Shanigan approached the intersection, the dog looked at him, and took off running down a side road. Shanigan acted on a hunch that the loose dog was there for a purpose and followed the running dog through three turns that eventually led the Heinrichs’ property. Every once in a while during the run back to his home, Buddy looked back at Shanigan’s car as if to make sure the trooper was following. By the time Shanigan reached the property, the work shop was fully engulfed in flames that also lapped precariously close to the Heinrichs’ house.

Shanigan said Buddy stopped at the end of the driveway and turned around to wait for him. When Shanigan got out of his parked car, the dog ran around the patrol vehicle and approached him, jumped up and down and nudged him as he walked up the driveway to the burning building. Afterwards, Buddy disappeared, presumably into the woods.

Shanigan was then able to verbally guide fire engines from local volunteer fire departments to the Heinrichs’ home. The work shop was destroyed and a nearby wood shed was badly burned. However, the Heinrichs’ home escaped the flames. Only the trim around the kitchen window was damaged by the fire.

Because of this, Buddy will be presented an award at 1:30 p.m. Friday, April 23 at the Alaska State Troopers Headquarters building at 5700 E. Tudor Road in Anchorage. Buddy and his owners, Lynnette and Thomas Heinrich and their son, Ben, will be given the award with much appreciation from Alaska State Troopers. AST Director Col. Audie Holloway and Trooper Terrence Shanigan, who works out of the Talkeetna post, will be present as well.