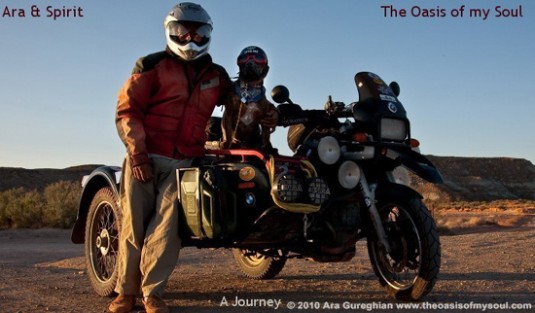 After spending years providing four-star meals to adventurous diners, a master chef decided to leave the daily grind behind and pursue his own journey – not to discover the savory tastes of French cuisine, but rather to try and discover the feelings of serenity and healing.

Man has set forth on such Journeys since the beginning of time – pilgrimages to Mecca, rites of passage into the wilderness on walkabouts and missions to uncover spiritual guidance through vision quests. But Gourmet Chef Ara Gureghian’s journey is a little different.

After losing his 26-year-old son, Lance, six years ago to a long battle with cancer, Ara was left heartbroken and empty. Two years after trying to find solid ground and acceptance, Ara decided to venture on his own quest to seek understanding, healing and maybe even rediscover the meaning of life.

But unlike other traditional solidarity-seeking Journeys that subscribe to a certain faith, or an ancestral passageway, or personal discovery through fasting, Ara’s voyage involves a motorcycle, a sidecar and a pit bull on the long and ever-winding road.

A world traveler and transcontinental nomad since childhood, before emigrating to the United States, Ara trekked through Europe, the Middle East and Africa. Shortly after graduating from “the best culinary school in Switzerland,” his father handed him a one-way ticket to Philadelphia. He was America-bound, with adventures and opportunities awaiting him.

But what Ara, 62, knows so well now: “There will always be the good and the bad,” he said with a tone of wisdom gained only from ultimate life lessons, as sorrowful as they may be. “There’ll be the healthy, there’ll be the sick.”

Ara vividly recalls his visit to the shelter that fateful day he met his newest best friend in life. It was one year after his son’s death.

“I went to the shelter, and there he was; he was in the last cubicle on the right,” Ara remembered. “I’ll never forget that day. Just curled up in the corner, raised his head, we made eye contact. He was beat up pretty badly …very, very badly. He was skin and bones – almost lost his soul. I mean there was nothing left of him.”

What would he name him?

“There was no hesitation calling him Spirit,” Ara said with a strong certainty.

Like Ara, Spirit has overcome emptiness and emotional damage. Even worse, he was physically abused with water from a fire hydrant, the strong pressure beating him down in body and in spirit.

After building their bond and going for a test drive together in Old Faithful – Ara’s motorcycle – Ara decided that he and Spirit were ready.

“He jumped in the sidecar, and I put his red goggles on, and that was it,” Ara said very matter-of-fact. “And he’s very important in the sidecar, OK? He knows it, especially if he’s got his helmet on, he’ll pose for the photos,” he added with a soft chuckle.

Ara sought advice from pit bull forums about his decision to hit the road on his bike with his pit bull in the sidecar and only $1,000 in his pocket, what he had left after spending his life savings in the fight for his son’s life.

“Everyone – everyone – said that I was crazy to think I could take my pit bull in a sidecar and go cross country.”

But Ara and Spirit proved them wrong. Spirit is clearly more than a sidekick in a motorcycle sidecar.

“Spirit is my therapy,” Ara declared proudly. “I mean this guy knows me better than I know myself. We’re together 24-7. I’ve learned a lot from him. I’ve learned patience … I mean gosh, talk about patience. This poor guy’s been in a sidecar for four years!”

In fact, Spirit is about to be officially crowned a therapy dog, a specific type of service dog. The tags are on their way.

On pit bull discrimination, Ara says he has been pleasantly surprised by the feedback he has received while on the road. “There’s only been two people who have had something bad to say,” he said. “You’d be amazed at how many people have pit bulls in their homes.”

Ara’s take on misconception of the breed is two-fold. For one, people lack common sense, and secondly, “a dog is a dog is a dog,” he said.

People must be responsible pet owners and not take risks, Ara continued. For example, dogs need to be on a leash in certain situations. “That’s just how it is – in public, around traffic, even hiking sometimes, especially in Texas where there are mountain lions.”

The bottom line? “You have to be a very responsible owner.”

While there is no clear “finish line” to this journey in plain sight, Ara’s compass is a spiritual one, with a true Spirit helping lead the way. With 140,000 miles in four years behind them, and Spirit’s philosophy of safety first when riding, which includes sporting a fashionable helmet, goggles, coats, heated blankets and more, this team is ready to take on the road untraveled.

With over 550 chapters detailing his journey thus far published onto his exceedingly popular website (and now a movie in the pipeline), Ara’s sense of freedom – from routine schedules, the slavery of technology and time – is felt deeply and sincerely in the heart and soul.

His excerpts about Spirit are no exception. Though man and dog have built strong friendships throughout history, Ara and Spirit’s bond couldn’t be broken, not even by wild horses:

“There is my buddy Spirit always ready to clown, his locking eyes into mine quietly talking of constant affection never diminished wherever we are and whenever as a constant state of mind. His coat (is) always warm on the cold days heating my hands themselves when frozen shut. His head is tucked into my armpit with so often a big sigh, yes, we are together, we are one. There is his unconditional Love lifting my Heart when so often needed only by a look and a hug.

Sincere  thanks to Becca Colbaugh of StubbyDog for contributing this piece. I met Ara online and offered to share his story, and he pointed out Becca’s wonderful recounting of his journey. I could not have said it better myself.