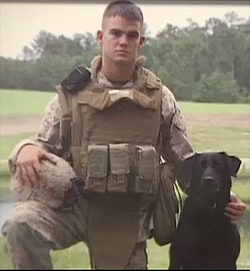 A brief video follow-up to one of the most popular stories we have covered this month, in which a bomb sniffing dog who rushed to the assistance of his fallen master was adopted by his family.

PFC. Colton Rusk died in December from gunshot wounds suffered during a battle with Afghanistan’s Taliban fighters. Reports stated that his dog, Eli, rushed to his side and crawled on top of him to try to protect the fatally injured 20-year-old machine gunner.

After being granted an early discharge, Eli was adopted by the Rusk family in early February, and has been spending time getting settled and establishing a routine.

So many of you were moved to tears when this story first broke that it seemed appropriate to visit Eli at home and see him safe and loved. And it was beyond touching to note that Eli still sleeps in Colton’s bed – just as he did in Afghanistan.