Phineas’ innocence may yet be proven, as key evidence has seemingly cleared him of wrongdoing.

It was only in June that we brought you the story of Phineas, the yellow Lab who has been sentenced to death at the hands of Salem, Missouri mayor Gary Brown. In June 2012, a neighbor child had been playing with seven-year-old Lexi Sanders, and accidentally fell and then claimed Phineas bit her. The bite mark on the girl’s side looks suspiciously human, and there were no indents where a dog’s long canines would have sunk in.

The girl was taken to the hospital, where it was reported that Phineas bit her. They reported the bite to the town, who immediately seized and quarantined Phineas. Mayor Brown requested a behavioral evaluation of him. Veterinarian JJ Tune determined that Phineas was a healthy, non-aggressive dog. Despite this, the mayor declared him vicious and ordered him to be euthanized (isn’t that up to a judge??).

Since then, Phineas has been carted from clandestine location to location, hidden in basements from the Sanders family, and even developed pressure sores on his legs from being kept in a crate for long periods of time. The Sanders are being charged for him being “boarded.”

All the mayor has to do is vacate the order to euthanize Phineas, and this nightmare would be over. But for whatever reason, he will not.

Recently, measurements of Phineas’ bite were analyzed by dog bite experts. It had been difficult to determine the size of the bite in comparison with the dog’s teeth, because the photos were not to scale. 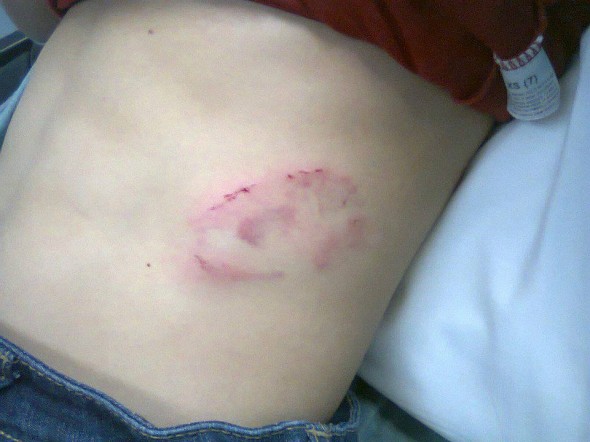 Experts needed a replica of the girl’s shirt to make the analysis, so the Sanders’ attorney, Joe Simon, got to work. A message was posted on the Save Phineas Facebook page asking “Do you recognize this shirt?” A fan’s niece had the same shirt, so she sent it in.

“As soon as I got this shirt in the mail I knew there was no way Phineas left this bite because this is just tiny,” Simon said.

Using markings on the shirt, the size of the bite on the girl’s side was finally established. Phineas was sedated in order to get measurements of his bite, and two experts in dogs bites and aggressive behavior plotted where Phineas’ teeth would have clamped down.

A written report was prepared by Dr. Kenneth Cohrn, a dentist and dental forensics expert, concluding:

“The overall size of the injury suggests a smaller dog may be responsible…based on the current information available…I must exclude Phineas as the biter.”

“It’s not even close,” Cohrn said in an interview. “The dog’s dentition is so much larger than the pattern injury.”

Canine behavioral consultant James Crosby’s report stated he could “reasonably exclude Phineas, to a degree of scientific certainty, as having been the source of this bruising injury.”

Mayor Brown claims he has not seen the reports, and that he made his decision last year based on evidence present at the time.

Well, the evidence is in, mayor. Time to keep your word and let Phineas go. The next hearing is scheduled for July 30th.

From the Save Phineas page:

If you’d like to send emails to the city officials in Salem, MO and voice your opinion (polite and respectful please,) the following was posted on another page.

NOTE: Due to the large number of emails being generated to the Mayor as a result of a Change.org petition, to ensure your messages are not overlooked, also send your remarks to the City Clerk at [email protected] and ask that your message be forwarded to each member of the Board of Aldermen.