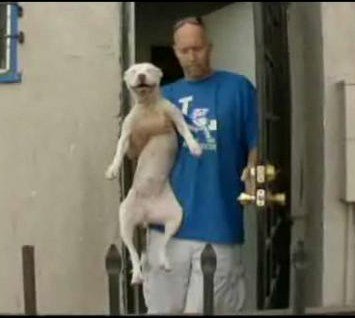 Animal rights advocate Hans Peterson is under arrest for rescuing a dog locked inside a foreclosed Los Angeles home. The previous owners moved out and left nothing behind but the dogs. One dog was left in the house, another in the garage.

A neighbor heard the dogs barking for days and called for help. L.A. Animal Services arrived but refused to enter the home. “Possibility the people could come back and then they could turn this around and sue the city,” according to Animal Services Officer Hoang Dinh. He claimed that the city is required to issue a written warning to the owners before entering the home or removing the dogs.

Hans Petersen was not willing to wait. He went into the house and emerged with a six-month-old puppy. The LAPD arrived moments later. Hans was arrested for interfering with Animal Services as they conducted their duties.

The puppy was taken to to the South LA Animal Shelter, but Taz, the dog in the garage, was left behind. **Update – that night someone returned to the home and broke Taz out of the garage. The dogs are free…