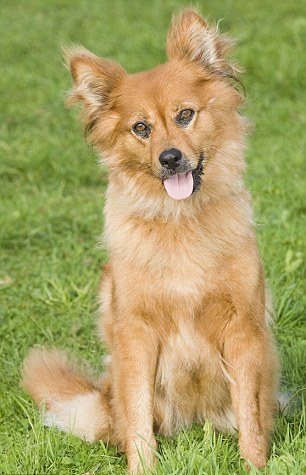 UK police are seeking a suspect caught on security camera footage abandoning a dog near the offices of British Marine Technology in Weymouth last Friday. The footage shows him getting into the back seat of the car, suggesting that at least two other people were present. Ginger attempted to chase the car, but a limp caused her to stop as her heartless owner drove away.

Ginger, a Shetland cross terrier and about eight-years-old, is in the custody of the Weymouth and Portland Borough Council. The council is trying to find a home for the dog, and trying to find the man responsible for dumping her. Ian Lewis, the local dog warden, said “Her claws were overgrown to the extent they were digging into her pads, which was causing her to limp with pain. I have spoken to the RSPCA who said they will be seeking prosecution.”

The man seen on the CCTV is described as white, about 6ft tall, and wearing blue jeans and a brown top. His car is a blue Kia Rio hatchback. Animal lovers are using social media in an attempt to identify the perpetrator, similar to methods used by online activists to hunt down cat dumper Mary Bale earlier this summer.