Spotted on a Yunnan Province highway, a truck hauling hundreds of dogs from Fumin to Kunming was intercepted by animal activists following a wave of social media outrage. Destined for China’s restaurants, the commercial vehicle became an object of interest after pictures of it began circulating on the Chinese equivalent of Twitter.

Concerned that the vehicle was in violation of transportation laws, police directed the driver to a nearby station. Animal advocates arrived and began unloading cages as soon as it was parked. In all, they counted  505 dogs packed into 156 cages.

Volunteers would spend the day and night feeding, watering and treating the survivors. Unfortunately a number of dogs were crushed to death in their cages.

When officers from the local Animal Inspection Department investigating the matter arrived the next day, they delivered unbelievably bad news: according to local law, the transportation of the dogs was legal. Because the driver of the truck had a license to transport them, police said that despite their ultimate destination, there was nothing they could do to hold the dogs. 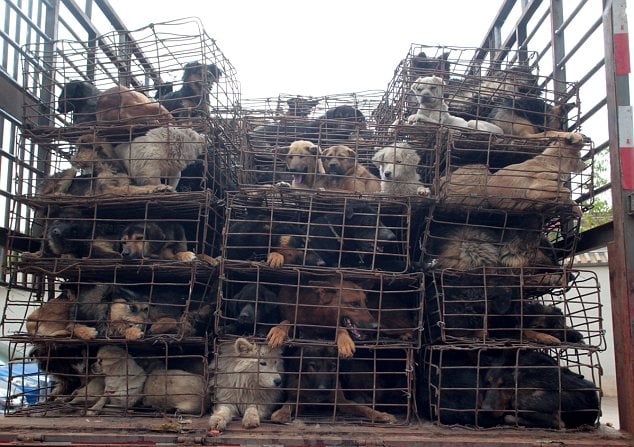 When all appeared lost,  a private dog rescue group came forward. In the interest of saving the dogs, they paid the truck driver 60,000 Yuan to take them from him. Now the hard work begins as dogs are dispersed to local shelters, and those responsible for saving them them scramble to find homes for as many as possible.

This is the third large scale rescue of its kind in Asia this year. In January, 750 dogs were saved by a Thai Navy patrol, and later that month,  1,100 dogs were saved from a trip to the slaughterhouse in Chongqing, China.