Miriam Jimeno and Carlota Román from Valladolid, Spain, knew something was wrong when they heard muffled barks coming from a nearby garbage container. When the two woman came close to the large metal box they knew for sure there was a dog trapped inside the container. Someone tossed a pet in the locked automatic garbage disposal and the pet had no way out. Luckily, the women and other concerned neighbors called for help and authorities came to save the dog. 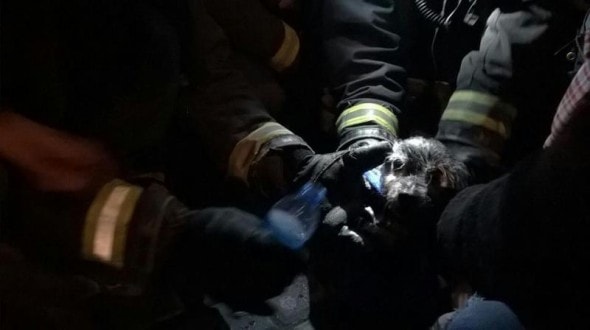 Police and firefighters arrived to the garbage bin located on the 20th block of Ferrocarril Street. They tried to reach the scared and trapped dog but couldn’t. Rescuers needed a key to unlock the bin’s locked doors. The city’s waste management office was contacted and soon a representative arrived with a key to open the bin.

Once the container was opened, rescuers learned the dog was placed inside a double and tightly knotted bag. Whoever tossed the dog wanted to make sure the pet had no way out and no chance of survival. Fortunately, the dog was saved.

Firefighters scanned the pet for a microchip and none was found. The dog, now named Abu, was transported to a local veterinarian where it was determined he is 15 years old, deaf, almost blind and suffers from an enlarged heart.

Community members rallied together to collect funds to pay for Abu’s medical needs. The senior dog is currently under the care of a rescue group (Defaniva) and is enjoying proper care and love in a foster home.

Animal rescuers hope to find Abu a forever home where he could enjoy the last of his days, which could just be a few months.

Abu’s adoption application can be found through the city’s animal rescue site.