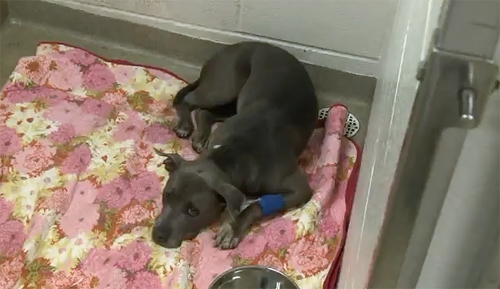 Investigators with the Animal Cruelty Task Force from the Humane Society of Missouri say a dog left exposed in blistering heat has been saved by a group of concerned neighbors. Residents of a St. Louis apartment building found a young pit bull chained to a porch railing, unattended without shade or water for as long as six hours.

Investigator Anne Vincent said the dog would have died from heat exposure if it weren’t for the residents who hosed her down with water and provided her with cold water.

“They saved her from death,” said Vincent. “She clearly would have died in these temperatures.”

The dog was seized, and is now in the custody of the Humane Society. Veterinarian Jeff Bergmann says her condition is unstable. “It was uncoordinated when it was walking,” said Bergmann. He reminds dog owners to keep pets inside when temperatures soar.

‘They`re like us only walking around in fur coats,’ Bergmann said.