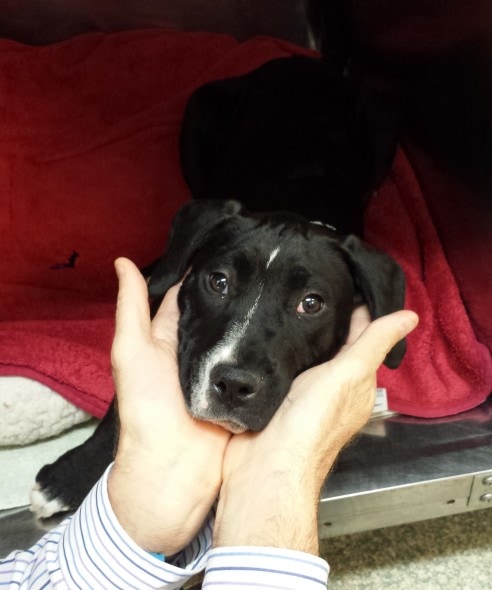 A week ago, Dallas firefighter Ryan Snow received a call that would have a huge impact on his life. Snow, along with other firefighters from Station 5, was called out to a neighborhood in Dallas after receiving reports of a trapped animal.

Once they arrived at the scene, Snow said they found a whimpering dog stuck deep in a storm drain.

“It just wore my heart strings when I saw the dog,” remarked Snow about the moment they discovered the black lab mix. The dog was found with broken legs and badly damaged elbows.  Once she was finally pulled from the drain, Snow took it upon himself to find her proper medical care. Snow also appropriately named her Roo, short for kangaroo,  because she would stand up on her back legs similar to her namesake.

Thankfully, Operation Kindness in Carrollton answered the call for help and provided the surgery Roo needed to repair her damaged limbs.

On Friday, just hours after her surgery was over, Roo’s hero was waiting for her at the Operation Kindness shelter, ready to adopt her. He had gone back for her because, according to him, he was not going to let the bond they formed go.

“I felt like I had to do something for the dog,” he said. And that he did! Once Roo is healed and ready to go, she will have a forever home to go to alongside her hero.

In the meantime, Snow says he plans to visit his new puppy at the shelter in between shifts at the firehouse.

Giving the dog a big hug on Friday, he said, “I just feel pretty blessed that she found me.”

Operation Kindness No-Kill Animal Shelter is the oldest and largest no-kill shelter in North Texas. Since 1976, they have provided animal care, adoption services, public education and volunteer opportunities to the Dallas/Fort Worth Metroplex. Their mission is to care for homeless cats and dogs in a no-kill environment until each is adopted into a responsible home and to advocate for humane values and behavior.