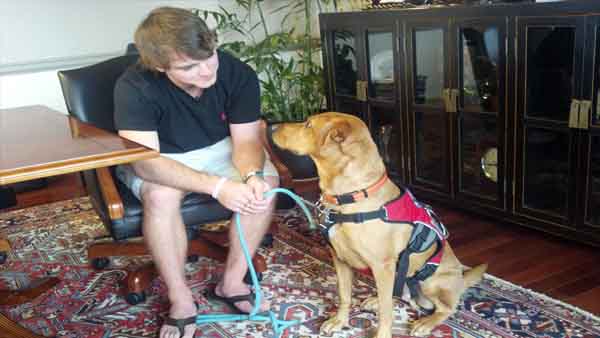 A Cobb County, GA man is suing the county and Popeye’s Restaurant for violating the Americans With Disabilities Act.

Four months ago, Taylor Gipson’s service dog, Bear, alerted him that he needed to eat something to correct his blood sugar. With Bear in his service dog vest Taylor walked into a Popeye’s restaurant and ordered food. That’s when the manager of the restaurant stepped in. According to Gipson, “It wasn’t five minutes after I ordered my food that this manager was right up in my face telling me to get out of her restaurant.” Not only did the manager order him out of her restaurant, she also called the police.

Gipson immediately presented the manager with his ADA card explaining that Bear was a legitimate service dog and under Federal law was allowed in the restaurant. The manager still wouldn’t allow Gipson and his dog to remain in the restaurant, and the police officer told him to leave too.

Lee Parks, attorney for Gipson said, “This young man had the American Disabilities information in his hand willing to show it to the officer who said ‘I don’t need to be told what the law is, I know it.’ He didn’t.”

Gipson is suing both the owner of the Popeye’s restaurant and Cobb County. Neither party is talking to the media.

For now, Gipson just wants to make sure others don’t have the same experience. “I want to see other people with service dogs and disabilities treated fairly in the future.”