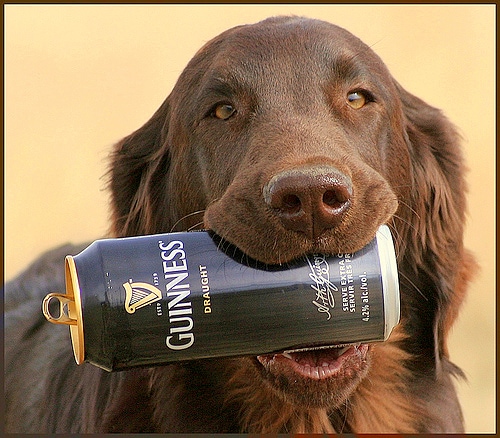 In light of St. Patrick’s day, here is a somewhat Irish-centered story:  While many owners living in areas with mosquitos active for at least part of the year treat their dogs with medicinal heartworm preventatives, others rely on what they feel is a tried and true method:  Guinness beer.

Having never heard of this myself, I decided to do some research on the subject.  Disappointingly, yet not unsurprisingly, there were no legitimate scientific studies to be found.  Many scoff at the notion and call this an old wives tale, but with the shunning of pesticides and a revived interest homeopathic remedies, alternative treatments are always worth looking into.

So you might be wondering, “how in the world could beer be good for my dog, aside from giving him an impossibly shiny coat?” Apparently it’s all about the hops.  Now, for those of you whose minds are jumping right to “hops toxicity,” from the information out there, hops themselves can be toxic to dogs, but generally only if they are consuming concentrated hops or hops pellets.

The amount of beer recommended for the heartworm treatment is minimal, so the risk of toxicity or alcohol poisoning is slim, but obviously should be taken into consideration.  But if the risk is there, why try it all?

Well, health risks come with any treatment.  Ivermectin, the main ingredient in most heartworm medications, is itself a poison – an anthelmintic.  It kills worms, but it can also be fatal for many dogs.  Dogs sensitive to Ivermectin have an anomaly that allows the drug to pass through the blood brain barrier and right into the central nervous system, causing respiratory distress, seizures, comas and death.  Breeds especially susceptible to Ivermectin poisoning are sheepdogs, shepherds, Whippets, silken windhounds, Skye terriers and Collies.

Many owners give their pets regular treatments, but because of a growing tolerance, some dogs contract heartworm disease while taking preventatives. And it’s worth keeping in mind that when parasites are attacked with poison, they can release their own toxins, causing the host’s (your dog’s) immune system to go haywire trying to fight its invaders.  Because of these factors, many are choosing to try a different approach.

Veterinarians go to school for a long time, and have lots of training and experience to back up their recommendations for modern medicine.  No one here is refuting the credibility of a dedicated and intelligent professional.  But it’s not uncommon for those in the world of medicine to become biased and to disregard anything that hasn’t been favorably peer-reviewed and cited 87 times.

Take a look for yourself, and you’ll find that many swear by the beer method.  It could just be good fortune that their dogs aren’t plagued by parasites, but who knows?  It’s something to look into, anyway.  If you’re interested, here is the suggested treatment course :

This part is crucial – you cannot just use any beer – it must be Guinness Black Draught, the kind that comes from Dublin.  It cannot be made anywhere else.  People say the hops and water in this area are what makes the treatment effective.  The hops sterilize the heartworms so more larvae cannot be produced.

Give 1 ounce (approximately 2 tablespoons) of beer per 25 pounds of dog.  You may allow the beer to sit out to become decarbonated so your dog does not become gassy or develop bloat.  Not all dogs are beer hounds, so it can be mixed in with food if they won’t just drink it.  Give them this dosage once, and then once again in two weeks, and only once a month afterwards.  If they test positive for heartworm within the first couple of months, give them the dosage every two weeks for three months.  If you’re not a beer drinker and won’t be enjoying the rest of the beverage after you administer the treatment, just recap the bottle and store it in the fridge until the next treatment – the hops won’t go bad.

Please remember, this article is only presenting an alternative view.  We are not medical experts and are not suggesting that anyone try treatments of any kind without thoroughly researching and discussing them with professionals.