The Connecticut Humane Society in Waterford wants to know who abandoned a sweet-natured, two-year-old, female Boxer just a short distance away from their front door. The dog was found tied to a post with just two feet of slack, but what surprised rescuers is that instead of being tied with a leash the pet’s previous owners used an electric cord.

“I am not happy,” Waterford Animal Control officer Robert Yuchniuk told WWLP News. “Abandoning an animal is a crime in the state of Connecticut. It’s an arrestable offense under the animal cruelty statutes.” 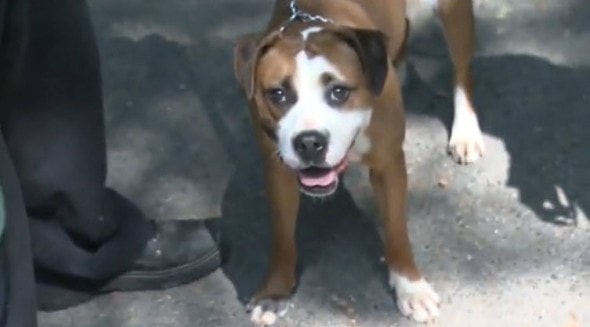 A neighbor heard the dog bark early in the morning and called animal control to report the pet. Around 1:00 a.m., Officer Yuchniuk arrived at the fence where the dog had been tied and abandoned, and rescued her. He was glad to have found the dog in good condition because she could have been easily attacked on that fence by a coyote.

Authorities are now hoping the community helps them capture the person(s) who abandoned the dog.

Rescuers don’t know anything about the dog’s past, but for now they are concentrating on ensuring the dog gets the help she needs and finds a loving forever home where she will be appreciated.

If you or anyone you know, have information on who could have abandoned this dog, please call Waterford-East Lyme Animal Control at 860-442-9451.