Ava is not supposed to be alive. When she arrived at Saving Paws Animal Rescue, in Wisconsin, she was already branded on both sides of her body with the number 55 and had barely escaped euthanasia.

Ava was also not supposed to be on the transport that she arrived on, but by some fluke, she ended up being taken from her shelter in Kentucky to the rescue in Wisconsin. It is very lucky for her that she did end up making that trip, though, as she was at the top of the list to be euthanized, due to space needs and because she was deemed ‘not very adoptable’. 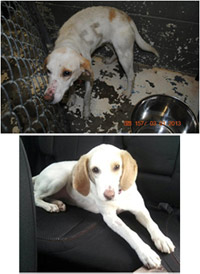 Once in Wisconsin, Ava went immediately to a foster family. Though they were not expecting to adopt her, the family immediately fell in love with her. In the end, they chose to adopt her.

Ava had arrived in terrible condition, though her beauty would soon come out after only a little bit of loving care. She has shown herself to be a gentle, sweet dog who loves her family. She is extremely lucky to have found a wonderful foster family that saw her potential.

According to Saving Paws, it is only due to dedicated foster families, like Ava’s, that they can continue to rescue dogs. Too often, people only consider adopting. However, foster families enable rescues to have more space to save dogs like Ava. Since she was not even scheduled to be one of the rescues, it was even more critical that there would be foster families available in order to prevent overcrowding.

Now, instead of the sad alternative, Ava is in her forever home, as happy as can be!

Saving Paws Animal Rescue is a non-profit organization dedicated to rescuing homeless, abandoned and special needs animals and finding adoptive homes or lifelong sanctuary for them. They also seek to decrease the amount of animal cruelty in the community through outreach and education.

They provide care and intake of stray, abandoned and unwanted animals; Adoption placement services for unclaimed or unwanted pets; and low cost spay/neuter programs (in the near future).