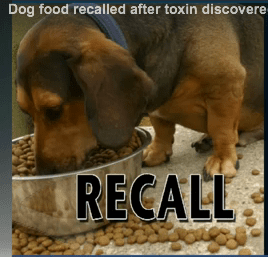 Hy-Vee Inc, a chain of grocery stores in the midwestern United States has issued a voluntary recall on certain bags of Hy-Vee dog food due to elevated levels of a chemical contaminant commonly found in corn.  The concern is Aflatoxin, which is a naturally occurring by-product from the growth of Aspergillus flavus (fungi) and can be harmful to pets if consumed in significant quantities.

The Iowa Department of Agriculture conducted routine tests in which higher-than-normal levels of aflatoxin were found in some samples of Hy-Vee dog food produced at a Kansas City plant.  The recalled products carry three different “Best By” dates and were distributed to Hy-Vee stores in Iowa, Illinois, Missouri, Kansas, Nebraska, South Dakota, Minnesota and Wisconsin between October 26, 2012 and January 11, 2013.

Symptoms of illness from exposure to aflatoxin may include sluggishness or lethargy combined with a reluctance to eat, vomiting, yellowish tint to the eyes or gums, or diarrhea.  If your pet has consumed this food and is displaying these symptoms a trip to a veterinarian is highly recommended.  Check this list for a complete list of recalled food.   If you have purchased this food, you can also take it back to the store for a full refund.