The last time Peter Farmer saw his dog, he was merely a puppy. When he was just five months old he was stolen from Farmer’s back yard in Fayetteville. 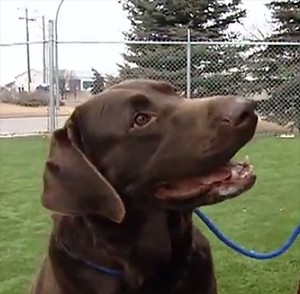 “I came home and the gate was wide open, someone had unhooked the latch and he was gone,” he said.

For weeks Farmer and family searched for their chocolate lab Rivers, but to no avail. In time all hope was lost. Three years later, that hope has been restored in an extraordinary homecoming provided by an unexpected turn of fate. Apparently, River had jumped the border.

“Three years later, I got a phone call from Canada. He said, “Rivers” has been found. I went, “You’re kidding.””

Rivers, re-named Buddy, had been living with an Oregon couple who had innocently adopted him through a friend. They lost him while visiting Calgary, Canada. He was eventually captured and turned over to animal services.

“We brought him in here and scanned him and sure enough, it had a microchip, which bounced to an address in Arkansas,” a shelter employee told KARK.

River’s current family heard the news and agreed that it was time for him to go back to his real home. On Tuesday he took a flight to Arkansas, back into the waiting arms of the Farmer family, who say they were elated to see him again after so much time had passed.

CTV attempted to interview River (Buddy) before his journey home. See the outcome in this cute outtake.