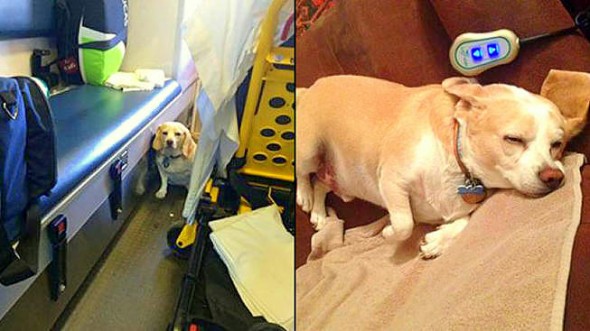 You can always tell how good a human is to their dog by how much their dog loves them.  Buddy loves his human so much that when JR Nicholson went to the hospital, the beagle mix jumped on the side of the ambulance and traveled 20 miles until a driver was able to flag the EMTs down to let them know they had a hitchhiker.

Mason County EMS received a call from ranch hand Brian Wright and responded to a San Angelo, Texas home. Eighty-five-year-old Nicholson told them he was feeling dizzy, and asked to be taken to the hospital.

“We didn’t have anything else to do but to load the dog up and put him in the ambulance and take him to the ER with us,” Brown said.

Wright stayed behind to lock up.

The 35-pound dog is allowed to wander about the ranch on his own and always comes back to the house, so Wright wasn’t particularly concerned.

After driving the nearly one-hour trip to Fredericksburg, Wright was stunned to learn that Buddy was at the hospital.  About 20 miles into the journey, a driver flagged down the paramedics and told them there was a dog on the side of the ambulance.  They brought him in and continued to the hospital.

“Two things go through your mind in a split second,” Wright said. “First, what could have happened to (Buddy), and second, you realize he is quite an animal.”

He says the playful dog loves going for tractor rides on the ranch.

“It was kind of funny. We were inside and he had jumped onto the control switch and turned on the sirens and the lights,” Brown said. “We didn’t know what was going on.”

Nicholson’s stay at the hospital was brief, but nurses brought him out to be with Buddy.

“I was impressed,” Nicholson said. “He didn’t have to go to the hospital with me, but he did.”

The elderly man loves dogs.  He only got Buddy from a shelter four months ago, and it is clear that the dog is happy to have a home.

“I had two dogs (before Buddy), but I had to put one of them down,” Nicholson said. “He came along at just the right time.  He’s now a member of the family.”