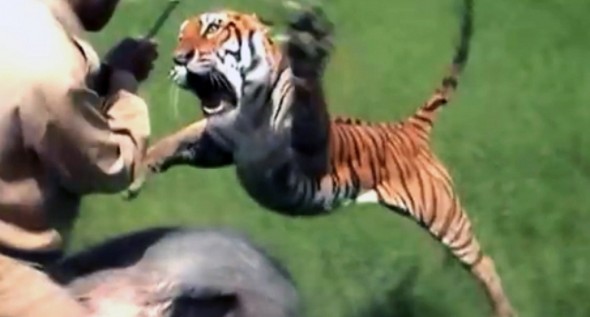 If anyone ever had a doubt about man’s best friend, they need only hear the story of Jacky to change their mind.

In the state of Uttar Pradesh, India, there is a dog being heralded as a hero for giving his life up to save his owner.  Gurdev Singh, a farmer, was sleeping outside of his house which is located in a small village not far from the Dudhwa National Park.  Jacky, Singh’s every faithful companion, slept right beside him, until disturbed by a tiger he smelled in the immediate vicinity. Jacky tried to rouse Singh and alert him to the immanent danger.

As Singh drowsily awoke,the tiger attacked and Jacky began to defend his owner.  The dog gave the farmer enough time to grab a stick, yell out, and start to defend against the animal. In the horrific frey, Jacky, severely injured, was dragged off by the viscous animal. Singh’s family rushed out of the house and quickly began their search for the four-year-old hero. Sadly, Jacky’s body was recovered some distance away.  Forest officials were notified of the tiger’s presence, and the family, grieved over their loss, buried the dog who had so heroically fought off the tiger without thought to himself, only that of his owner.

“Jacky’s mother was a street dog and my children, Supreet and Gulshanpreet, took it in four years ago as a pup. It was a part of our family and used to follow them to school. Gulshanpreet is inconsolable and didn’t eat for a day. Jacky returned the favour of a few chapatis a day by giving up its life. I wish humans could learn from it how to love others and show devotion,” Singh told the Times of India.

A forest ranger stated the tiger’s appearance in the village was not entirely surprising, given the population of large cats in the region is very high and, as humans have encroached on the area, they will often come into villages looking for food.

Jacky, greatly missed by his family, is a standing testament to the loyalty of a dog to their humans.  He gave his own life saving the one who had taken him out of a life on the streets.  Jacky is the true personification of the word loyalty.