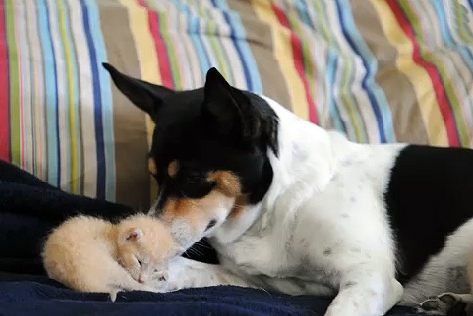 Lucky was recently rushed to Savanna Animal Hospital in Florida for an emergency c-section that produced some very sad news: she gave birth to a litter of stillborn puppies.

“But how do you feel about kittens?” the vet asked. By chance, a vet employee was fostering a litter of kittens abandoned with the Hobe Sound Animal Protection League, and offered Lucky the chance to act as a surrogate mother.

Hoping to prevent Lucky from becoming depressed at the loss of her pups, her owner, Michelle Wallace said yes. “I didn’t even know cats could eat from a dog,” Wallace said. “She was just so drugged out, maybe it made her accept them a little better. But it’s fine. They eat. She even cleans them.”

Now the circle of life has taken a turn in favor of Lucky and her newly adopted litter:  the kittens have a mother, and Lucky has her babies to care for.  ♥