On April 1, 2014, a landscape employee from Aseo Capital in Bogota, Colombia, mutilated a female dog while he worked cutting the grass on a public area. The man was using an edge trimmer, also knows as WeedWacker, and it appears he intentionally hurt the stray.

Witnesses say the dog, now knows as ‘Muñeca’ (doll), was barking at the landscaper and the man intentionally attacked her with his work tool. Consequently, he lacerated three of her legs and broke the forth one.

The man defended himself saying he did not see the pet and the injuries inflicted on the pet were not intentional. However, community members who came to aid the dog say there is no possible way for the worker to sustain the event was a simple accident.

YouTube user Pieranghela Riaño M. uploaded a video to the site (WARNING IT IS GRAPHIC) showing the grass Aseo Capital employees were cutting was not more than a few inches tall. The video also shows the area had no bushes the dog could have used to hide, and therefore, the mutilation could not have been an accident.

In the video we also hear a concerned animal lover question the employee as to why he attacked the dog, but the landscaper continuously says it was an accident and the dog jumped in front of the machine.

Police were called to the scene and rushed Muñeca to CliniSur, a local vet clinic. Authorities also transported the man responsible for the horrific accident to a police station after community members threatened to lynch him for what he had done.

Animal lovers across the city and country came together to demand justice for Muñeca, they want to make sure that the perpetrator of the heinous act pays for what he has done.

According to Semana.com Aseo Capital initially said the attack on the stray was an accident, but after insurmountable pressure from the community built up, the company decided to suspend the employee without pay until an investigation of the incident is performed. The company also agreed to cover all medical costs for the dog.

A woman by the name of Adriana has come forward to represent Muñeca and look after her best interests.

The injured canine received emergency care at CliniSur, but veterinarians and Aseo Capital thought it would be best to transfer her to Dover, a specialized veterinarian clinic. There, Muñeca under went emergency surgery to correct and close her three mutilated extremities, and to stabilize and fix the forth and broken leg. 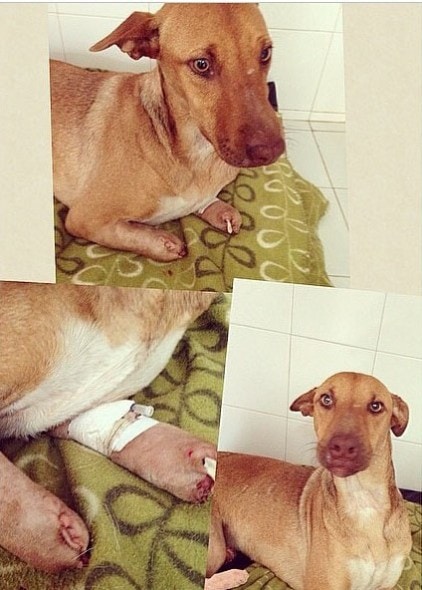 So far, Aseo Capital has paid more than $400 dollars for the stray’s medical costs, but it is estimated the total cost of her treatment and recovery will exceed $10,000.

At first, veterinarians though euthanasia was Muñeca’s best and only humane option, but since her surgery, specialists have discovered the pet has a tremendous will to live and they have opted to save her life.

Adriana and many other Colombian citizens have expressed interest in adopting and caring for the pet.

Muñeca has made a tremendous recovery. She is eating on her own and wags her tail whenever she is visited. Veterinarians have ordered a specialty dog wheel cart and the pet has been fitted for prostheses which are being manufactured in Spain.

Specialists expect the cart and the prostheses help the dog obtain a better quality of life.

Animal lovers across Colombia are now pushing for harsher punishments for animal abusers and are campaigning, pressuring government officials to change the laws.

We hope Muñeca’s accident is not forgotten and harsher laws do come out of this horrific incident.