In one of the worst ever reported cases of animal abuse in Cape Town a dog has been rescued after being buried alive in a pit at a Khayelitsha School. 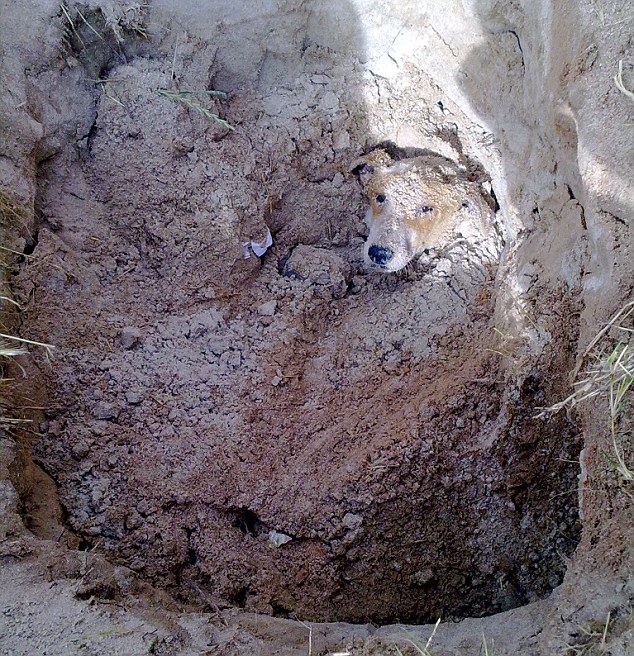 Update (10-31-11)  Just one week after reporting this incident, the school worker who did so was fired. According to the Cape Times: Bukelwa Mbulawa said she took the day off a week after Warrior was saved because she was ill, and when she returned last Friday she found out that she has been fired.

“Colleagues told me the principal called a meeting with the cleaners on Thursday when I was off. They told me he said he knew “everything” and that I was the one who called IFAW and took pictures at the scene. He ordered my colleagues to tell me not to return to work on Friday as I no longer have a job,” Mbulawa said as she broke down in tears.

Mbulawa said she was her family’s breadwinner and has two sons, one of whom is a Luhlaza Secondary pupil.

“I am the only person who earns a salary in my house. Before I worked, I used to go from door to door to beg for food and clothes and until I can find another job, I’ll have to do the same again. Saving Warrior’s life cost me my job, but I do not regret it. It was the right thing to do. I just don’t see why I have to take the blame on my own. We decided as a group that we were going to let the animal welfare know what was happening. The principal could have at least spoken to me to find out my side of the story.”

Makhaphela denied that Mbulawa’s dismissal was connected to Warrior being saved. “The school simply does not have the funds to pay her salary and for this reason we had to let her go. There is no connection. People are just spreading rumours,” he said.
-end update

The Mdzananda Animal Clinic in Khayelitsha received an anonymous tip-off at 8:30 Thursday morning to say that janitors at the Luhlaza Secondary School had been spotted digging a hole on the perimeter of the school sports field, and then burying a live dog in it.

Veterinarian Dr Edson Man’Ombe and animal welfare carer Lazola Sotyingwa, immediately rushed to the school and apprehended two janitors on the school field. The men initially claimed the dog was dead, but on further questioning admitted the animal was still alive when they buried it – they said one of the school’s senior supervisors had told them to get rid of the dog as it was causing a nuisance by hanging around the school’s classrooms.

Man’Ombe and Sotyingwa then instructed the men to open the pit, and the dog, a dalmation-type cross breed, was found barely alive at the bottom of a hole between one and 1,5-metres deep. It was rushed to the Mdzananda Animal Clinic and is now in the care of professional veterinarians. The dog is also partially disabled probably as a result of earlier injuries from a motor vehicle accident.

Mdzananda, which is the only full-time on site veterinary facility in Khayelitsha, is a project of the International Fund for Animal Welfare (IFAW- www.ifaw.org). 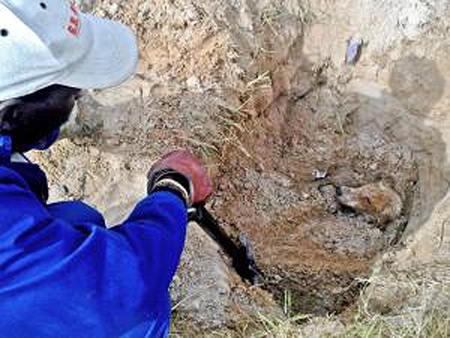 “This story is tragic and, as awful as this story is, without access to animal welfare these are the kinds of desperate measures people resort to when they have nowhere to turn for help,” said Jane Levinson, clinic coordinator at Mdzananda. “We need more animal welfare support and humane education initiatives in our townships and schools.” 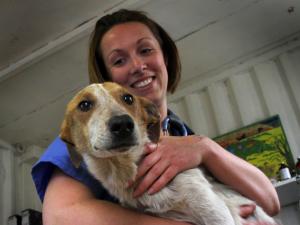 “None of this excuses the decision of a senior, and presumably educated and intelligent supervisor, to instruct his juniors to dispose of a problem dog in such a cruel fashion,” she said. “We can only hope that none of the learners at the school were exposed to this horrific event.”

The names of the janitors and that of the supervisor who allegedly gave the instruction to them to dispose of the dog are known to Mdzananda and a case has been opened at the Lingelethu Police Station in Khayelitsha.

About IFAW (International Fund for Animal Welfare) Founded in 1969, IFAW saves animals in crisis around the world. With projects in more than 40 countries, IFAW rescues individual animals, works to prevent cruelty to animals and advocates for the protection of wildlife and habitats. For more information, visit www.ifaw.org.