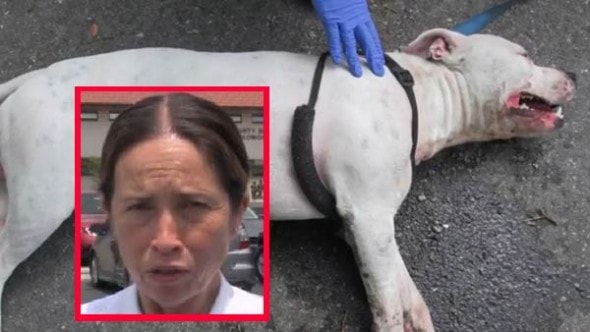 In Hillsborough County, Florida a dog’s life was saved thanks to the quick thinking and action of one of its Sheriff’s deputy.  After finishing a traffic stop, Deputy Linda Ruggiero had noticed that a dog, not far from where she was, was in a very bad way.  Under a great deal of distress, if she hadn’t acted, the dog may have died.

Deputy Ruggiero said that the dog was in such bad shape, he was unable to stand.  A man holding the leash connect to the collar on the dog kept yanking on it in a effort to get the dog up and moving.  Try as the dog may, every time he looked like he’d get up, he’d collapse with exhaustion.

“The man told me he was exercising his dog, running him off his bicycle and he was bragging that he ran the dog seven miles a day,” said Ruggiero.

The dog was taken to HCSO Animal Services shelter straight away.  The poor dog kept vomiting the entire way to the shelter, and almost didn’t make the trip there.

While the dog was on his way to help, Deputy Ruggiero arrested the man that was holding the leash.  His name is Mark Spriggs of Tampa Bay.  He is charged with felony aggravated cruelty to animals.  Once the deputy ran Spriggs’ information, it was discovered that he was in violation of his probation.

As for now, the dog is resting comfortably at the animal shelter.  It’s going to be a while before medical professionals are going to be able to give him a full medical.  He needs that time to recover, otherwise it may be too stressful on his body.

He has been nicknamed Chance by the shelter staff, and he is reported to be in stable condition as of the writing of this article.  This is the fourth time in two months that a law enforcement officials have had to come to the rescue of.