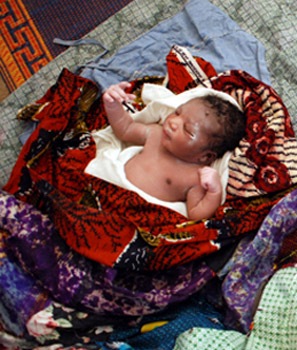 A loyal canine has earned hero status after he was found cradling an abandoned baby that he had spent the night protecting. According to authorities, a two week old child was discovered under a bridge in Winkongo, near Bolgatanga, the Upper East Regional Capital of Ghana, after being forsaken by its mother.

Left alone in a hostile environment, the baby did not have to fend for itself – it was saved by a local farm dog.

Officials say the two were found together many hours after the dog went missing. A search party spent the night combing area fields and forests in pursuit of the wandering canine, but it was not until morning that they made a stunning discovery when they found him under the bridge, near the farm, with a human baby nuzzled against him.

The remarkable tale was reported by Madam Rosemary Azure, Talensi-Nabdam District Director of Health, in an interview with the Ghana News Agency.

According to Madam Azure, the chief of police said the vulnerable youngster had been abandoned by its mother for reasons unknown before being saved by the dog. His umbilical cord was still uncut and had been infected, but the young child was otherwise unscathed after spending the night with the protective canine.

A local health directorate has taken custody of the child until a new home can be found for him.