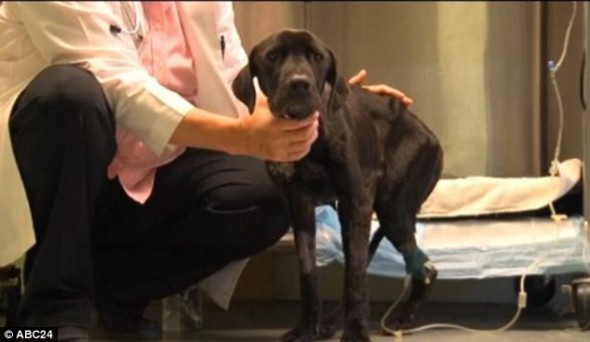 Last week an 18-month old dog called Joey was so hungry he was eating rocks. Found on the street in Tunica, Mississippi Joey was starving to death. He is now on the road to recovery.

When Joey was rescued he was so thin his ribs were poking through his skin and he could barely walk. He had been abandoned and neglected, not having been fed in months. At a year and a half old he weighed only pounds more than a puppy. He was finally saved by Tunica shelter director Sandy Williams.

Willimas brought Joey to the Central Animal Hospital where the vets there have been working hard to help him. Dr. Pam Chandler said, “He is the most emaciated that I have ever seen in a pet that was living.” Once evaluated by the vets it became clear Joey had been eating rocks in a desperate attempt to satisfy his hunger and stay alive. “They removed 14 or 15 large rocks from his colon and stomach area,” said Williams.

Williams is horrified not only that Joey was abandoned, but that no one did anything to help him for so long. “I was told when I picked him up that his owner had been in jail for several months, but how can a community turn their back on a little dog like this?”

Joey is starting to recover and making big improvements. Last week the vets weren’t even sure if he would make it, but he has already gained two pounds and is thriving in the loving environment provided by the vets. “He loves to be in people’s laps,” said Dr. Jennifer Karnes. “We’ve created a wonderful monster; Joey thinks he should be the center of attention at all times.”

Joey is being closely monitored by an internal specialist. Because of the rocks he ate he needs to be walked eight times a day. The vets still don’t know whether there will be long term damage from the rocks or not. Joey will spend at least another month at the vet recovering.

Adoption inquiries have come in from all over the country from those touched by Joey’s story. The vets are waiting until Joey’s until they have a better knowledge of what ongoing medical issues Joey may have before placing him.

Police in Tunica, Mississippi are conducting a criminal investigation into Joey’s mistreatment. They are trying to locate Joey’s owner and have been going door to door in his neighborhood but haven’t found any leads yet.