A Marysvile, Washington dog owner is pleading for help after a neighbor’s surveillance cameras captured the theft of her dog.

Smith says he doesn’t think the the dog was treated very well. “She was quite shaken up, quite scared, literally shaking. She has a big knot on her nose as if she was hit by something, or maybe bit by another dog or something.”

The person(s) responsible for Takoda’s disappearance hired a lawyer, who contacted police to negotiate Takoda’s return. They have not yet been identified.
[dcs_head top=”0″ color=”#666666″] [/dcs_head] 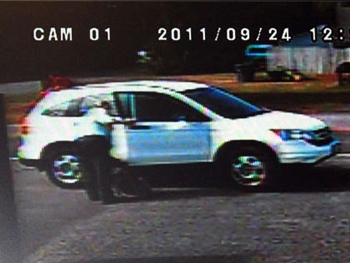 In the footage below, a woman is seen pulling Takoda out of the family’s yard last Saturday, and then pushing her into an SUV before speeding off. Colleen Smith says she is haunted by the incident, and has turned the tapes over to the police with the hope that they can identify the dognapper.

The Smiths noticed Takoda missing when they came home Saturday evening. They noticed a piece of their electric fence was broken – the thief dragged Takoda over it in haste. The dog can be seen howling in pain when she is dragged into the SUV: because the fence was still functioning the collar kept shocking her until she was out of range.

“It devastates me to think what happened to her and what trauma she may be going through right now,” says Colleen Smith. “She doesn’t know what’s happening.”

The Smiths are understandably devastated by the loss of their pet. If you recognize the person in the video below, or if you have any information regarding the whereabouts of Takoda, please call Marysville police at (360) 363-8300.