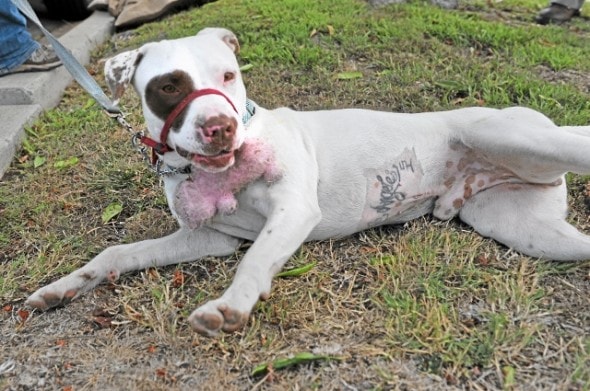 Petey is a pit bull that has undergone trauma that no puppy should have to endure. Found abandoned and tied to a pole a woman came to his rescue and brought him to ROMP Rescue where they discovered that Petey’s underside was covered with a gang tattoo.

Petey was found about a month ago tied to a pole outside a donut shop in Lomita, California. The woman who found him called police for help, but help never came. So she provided the dog with food and water. When at the end of the day no one had come to help she took him and home and to a veterinarian to be checked out.

“He was crying,” said Randy with ROMP Rescue. “She saw him and she called the police and they said they would call animal control. Neither one ever showed up.”

The woman was unable to keep Petey permanently so she reached out to ROMP Rescue and Randy came to take Petey. Once back at ROMP he noticed markings on Petey’s belly and thought he might have ringworm. When he shaved Petey’s belly he was shocked by what he found.

A tattoo that lists the name of a “set” of a Los Angeles-area gang covers most of Petey’s underside.

“I’m speechless,” said Randy. “I can’t understand why they would do that. The pain involved is obviously more than any puppy should have to endure.”

ROMP Rescue fears the tattoo isn’t the only pain Petey has endured. Although he is great around people he gets angry and nervous around other dogs. They hope to find him a home in the future, but for now he’s not ready for one.

A fund has been set up for Petey’s training and care. Donations can be made here.