A man driving down a road in Lepe, Spain, came upon something on the road that at first he thought were bunnies, but after taking a closer look, he discovered eight newborn puppies abandoned on the the road. 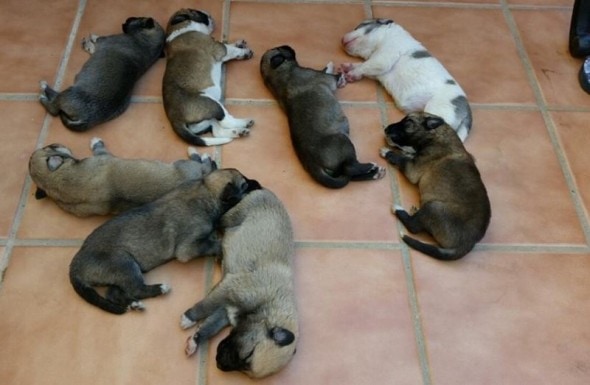 From a distance, the man saw eight little bumps on the road. At first he thought they were bunnies, but when he slowly approached the animals, he realized that what was on the road were newborn puppies instead. Someone had abandoned them on the sunny and desolate road to die.

According to a Facebook post written by María Cruz, her father immediately picked up the dogs and saved them from their death. He took them to the nearest police station where officers contacted animal control but were informed they couldn’t take the puppies because the facility was at maximum capacity.

Not wanting the dogs to die, the hero man took them home to nurse them and to try to find them homes on his own. Luckily, neighbors and friends stepped forward to give most of the puppies loving forever homes.

Thanks to this caring man, eight little dogs were saved and will get a chance to live a happy life.