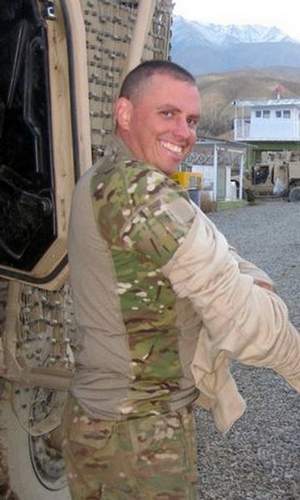 Thanks to an extraordinary 48 hour rescue mission, an Iowa National Guard medic and the dog who stole his heart will soon share a home in the US.

Aaron Windschitl first noticed Oreo when the stray snuck inside the wire to seek food and shelter near his tent just outside of Kabul. While his fellow guard members payed little attention to her, something about the downtrodden dog got to Windschitl, and the pair befriended one another, building a bond and leaning on each other in the midst of conflict.

“There is just something about her. You look at her and know what she went through to be alive, yet she makes you feel as if she understands how you feel,” he said. “The chance to pet a dog can feel like an escape from the reality of this place. She gave that to me.”

Shortly thereafter Windschitl got bad news when he was ordered stop feeding and caring for the dog. Military regulations prohibit the adoption of wild animals, but Windschitl had hoped that his superiors would turn a blind eye, encouraged by tales of other war dog rescues. Unfortunately they maintained their position, and the medic said he was heartbroken at the thought of leaving her behind when he returned to the US – so he didn’t. 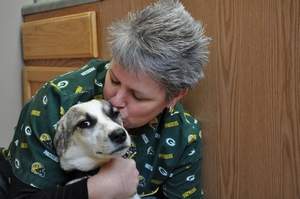 Oreo gets a checkup – and a little sugar.

Knowing that dogs in Afghanistan face stonings and beatings by locals, Windschitl acted quickly. He wrote  to Puppy Rescue Mission in New York.  “She is sad, but didn’t go away. She is still outside my tent. I have been told that it is just a matter of time before they will be ‘putting down’ the remaining dogs that are around here.”

Refusing to give up on his friend, the dog lover then spent $100 to have a shopkeeper transport Oreo to Kabul, donated $250 to Puppy Rescue Mission, and conducted a frantic fund drive to raise the remaining money needed to move the dog to New York.  Oreo’s tale resonated with animal lovers back home, and in no time she was on a plane to the US. Windschitl then spent over $400 to fly her Des Moines, where his family took her in.

Local vet Lisa Deppe examined Oreo, and while she says she was first opposed to the idea of importing a stray with so many here needing help, one look in Oreo’s eyes changed that: “There are dogs and then dogs who are people in a dog suit. You look in their eyes and they are reading your heart.”

When Windschitl returns to the states, his wife and their four other dogs will welcome Oreo into their pack for good. Considering the comfort she offered him in his darkest days, he said giving her a safe place to call home was the least he could do.