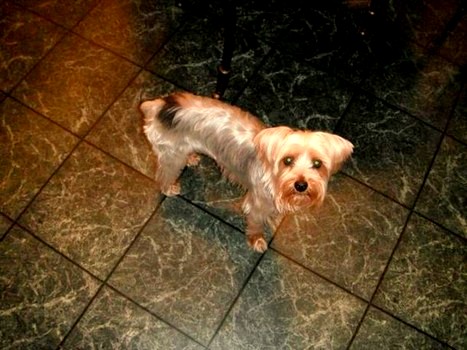 A Fort Worth, Texas family is grieving the loss of their 10-pound Yorkie, who they say was brutally murdered by their postman.  No arrest has been made so far, but both the police and US Postal Service are investigating the incident.

Lawrence Brown was working in his garage when he heard a sudden commotion and dog whimpering.  When he came to see what was going on, he saw the mailman walking by and confronted him.

Maxwell had gotten out of the yard and had been struck by the mailman. Lawrence says the man said “I did what I had to do.”

He was shocked.  He and his wife Taiesha could not believe what happened.  They took Maxwell to a veterinarian, who informed them that their five-year-old dog’s skull was fractured and he had a severe spinal cord injury.  Nothing could be done to save him, and they were forced to euthanize him.

The Browns filed an animal cruelty charge with the police, who are now investigating.

The USPS sent this statement to NBC 5:

The Postal Service takes the issue of dog bite prevention very seriously. We are saddened at the loss of the customer’s pet. Local postal officials are conducting a thorough investigation and will take appropriate action, as needed, pending the results. We understand that in this instance, the letter carrier was defending himself from a dog attack. Letter carriers receive information on how to remain safe while delivering mail in order to avoid dog bites and attacks; including backing away from a dog, not making direct eye contact with the dog, and not handing mail over to a customer–especially a child. Postal officials will address this situation to ensure that letter carriers follow recommended actions to avoid dog attacks/bites in the future.

Lawrence and Taiesha, who have no children, says Maxwell was like a child to them.  They are unconvinced by the letter carrier’s story, as they say their dog was never aggressive.  In addition, the mailman has been in the area for a long time and knows all of the dogs in the neighborhood.

“For almost five years, he’s seen my dog every day and he knows that that’s our dog,” Taiesha said.  “It is very heartbreaking for me, you just deal with it one day at a time.”