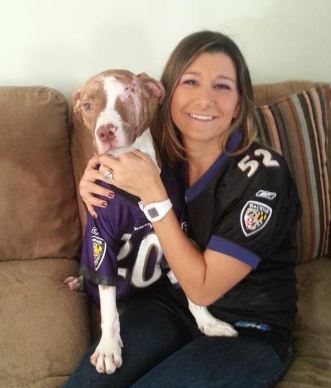 Molly the pit bull experienced the very worst and the very best of humankind during her very short life. Molly was brutalized as a bait dog and then left tied to a pole in the basement of an abandoned Baltimore house at six months old. She was found by a workman, rescued, then adopted into a loving home.

Molly flourished in her new home and became attached to her dog siblings and her humans. For three months she knew happiness, comfort, companionship and love. Then a sudden and catastrophic health event ended her life.

A friend made the following memorial video in honor of Molly. It is both heartbreaking and heartwarming to watch.

WARNING: The video contains a few disturbing photos showing Molly’s injuries when she was found.

The creator of the memorial video writes:

Molly, at 6 months old, was found in a basement, tied to a pole… it appeared she’d been used as a bait dog in a dog fighting ring. With love and support, Molly healed and continued to love both people and dogs, despite what was done to her. On February 1st Molly took a sudden turn, just when things seemed so hopeful, and developed a profound infection of her entire hind end. It progressed so quickly it ruptured disks in her spine, paralyzing her. Molly had fought hard, but she would not be coming home this time… This video is in honor of Molly, and all those who loved and cared for her. Run Free Molly, thank you for giving us a second chance.