On July 30, 2014, Darren Clark from Hollywood, Fla., was out walking his sister’s dog, India, when a man approached him and robbed him at gunpoint. The armed thief took Darren’s cellphone and the nine-year-old Yorkshire Terrier. Two days later, police officers found the pet roaming the streets. Thanks to the pet’s microchip, India was reunited with her owner. 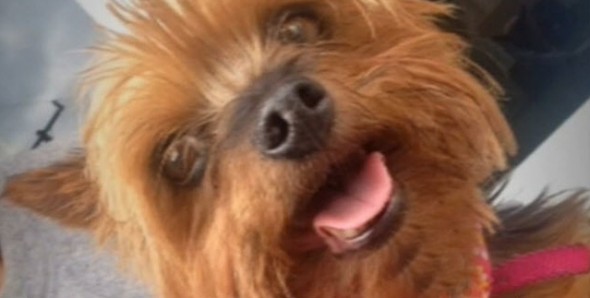 Damica Clark left her dog under her brother’s care when she had to work a double shift. Darren took the dog out for a walk around 1:30 a.m. but when passing an area grocery store, the dog sitter and pet were surprised by the armed robber.

Fearing for his life Darren gave the criminal his cellphone and never expected the man to snatch the dog from him. The thief then fled in a dark colored SUV.

Two days later police officers found an elusive and injured dog running down West Dixie Highway in Hollywood, Fla. The pet was taken to Hollywood Animal Hospital and veterinarians treated her for cuts to her face and eye, and a lost tooth. India was scanned for a microchip and because she had one, the dog was reunited with her owner.

Damica said her dog had been taken medicine for an infection prior to being stolen. India had missed a few doses and seemed a tired, but she made a full recovery.