Ginger is a two-year-old German shepherd that was at the Apple Valley Animal Shelter in California, after being surrendered by her human.  He became homeless and didn’t want Ginger to suffer because of it.  This was something she just found unacceptable, as she escaped and went to try to find her human.

“Her previous owner didn’t want her to live out of a vehicle.  It was a very difficult thing for him,” said Gina Whiteside, who with the Apple Valley Animal Shelter.

Ginger didn’t want to surrender, and most certainly wasn’t going to just hang around the shelter waiting for someone to adopt her.  She did what anyone would have.  She broke out of the shelter and went looking for her human.  She jumped over a six-foot gate at the front of her kennel, snuck past not one, but THREE closed doors and around shelter staff to get out.

While making her escape, she accidentally set off the motion detectors in the shelter.  This prompted animal control to be called in to investigate, and when the officers arrived, the place looked as if someone was rifling through things inside, but Ginger was nowhere to be found.

“When the animal control officer came, he noticed that the front counter phones were all over the floor and papers as well,” said Whiteside.  “It looked like someone trashed the front area.”

Ginger was recovered three days later, completely unharmed and seeming no worse for the wear.  She was found just a short distance from her former home, so that’s why it’s assumed she was looking for her family.  Since the incident hit the news, there’s been a lot of interest from people looking to adopt her, and the shelter has put her in a more secure space. 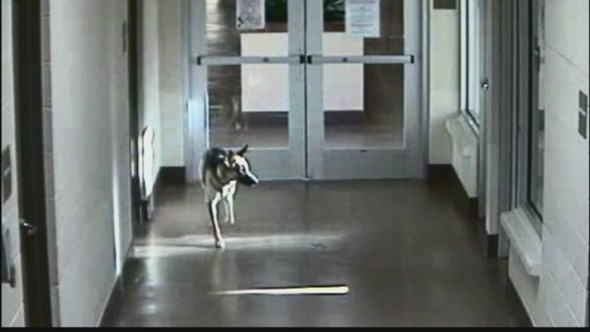