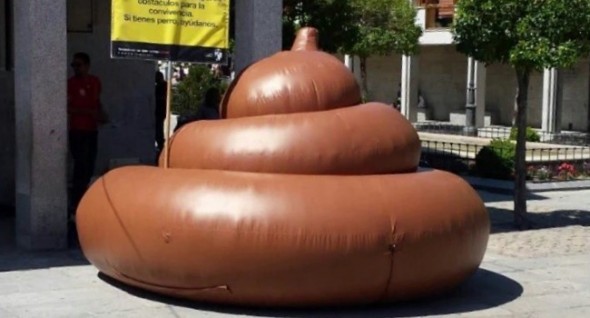 The hashtag reads #nomascacas. And Spanish fluency is hardly required for an accurate translation.

The town of Torreldones in Spain has taken a whimsical approach in encouraging its dog-owning citizens to do the neighborly thing and clean up after their pooches, installing a giant inflatable poop to get the message across.

Angel Guiraos, town council spokesman of this Spanish city of 22,000, told The Local that Torrelodones has about 6,000 dogs who can produce about 1,100 pounds of excrement every day.

“That is more or less what this inflatable represents, the amount of poo left on the streets across the town each day,” Guiraos said. “We are asking dog owners, in a fun, non-aggressive way, to realize the importance of clearing up after their pets.”

Residents in the town are being encouraged to take selfies alongside the prodigious poop (it’s roughly 10 feet wide and more than six-and-a-half feet tall) and post it on social media with the hashtag #nomascacas – No more poops.