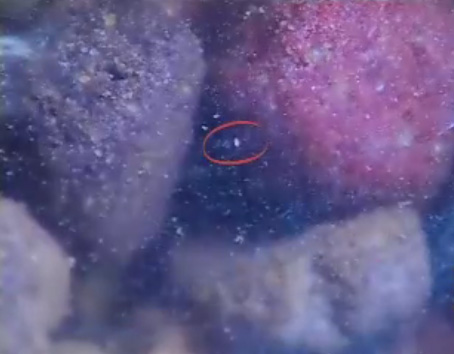 A Washington family thought they had a serious problem with dust until they realized the dust had legs. It turned out to be thousands of tiny pests called grain mites that came in with the dog food.

“They’re so hard to see. That’s the worst part about it,” said Doug Froehlich of Tacoma, pointing to an adult grain mite moving inside a sealed Ziplock bag of dog food. “This is just the most disgusting thing ever,” added his wife, Carrie Froehlich.

For nearly a month, the Froehlichs have been trying to rid their home of thousands of microscopic mites that spread from jumbo bags of Purina Beneful, which they kept in the corner of the ground floor of their split-level home.

The family says they’d been feeding their two dogs Beneful for nearly five years and never noticed a problem, until they discovered the “dust” on Oct. 6. Purina says it will reimburse the Froehlichs for the two infested bags of dog food they purchased, along with the expense of cleaning up. When asked about similar customer complaints, Purina said the company sells millions of bags of pet food each year and reports like the Froehlichs are the exception, rather than the rule.

0 thoughts on “Is your dog’s food bringing grain mites into the house?”