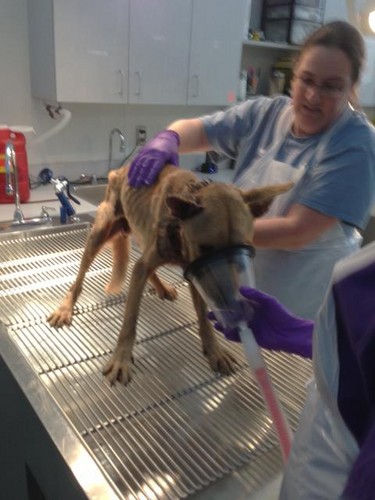 Thanks to a good samaritan, a badly abused dog is being given a chance to survive after being found in a dumpster in Dallas.  The dog, who has been named Java, was emaciated  and strangely had a metal can around it’s neck.  The can had been on for some time and as the dog grew it had cut into her ears.  But Java was not alone as another dog was with her, watching over Java, and they were rescued together.

The samaritan, who did not want to be named, brought the pair to Dallas Animal Services on Sunday.  The second dog, a shepherd mix who has been named Joshua, was uninjured.  After the can was cut off Java was sent to Metro Paws Animal Hospital for treatment, but the prognosis is uncertain.  “The next few days are critical,” according to a post on Animal Services Facebook page. “We have to get her stable enough for surgery and watch out for organ failure due to her starved condition. But that tail is wagging.” 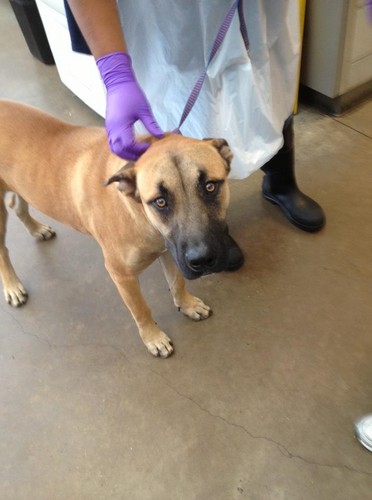 As of this morning Java was alert and eating, but will need extensive care and love to get healthy again, and eventually will need a foster home to help nurture her back to normal.  Following that, if all goes well, she will be up for adoption.  Joshua, who stayed by poor Java’s side through her ordeal, is healthy and is still at animal services but the shelter is full and he needs a foster home as soon as possible.  His identification number is A750714 and he’ll be available Thursday, if not before.

Anyone interested in making a donation towards Java’s veterinary expenses can do so by calling MetroPaws at 214-887-1400, or through the Animal Allies of Texas website at http://www.animalalliesoftexas.org/donations/