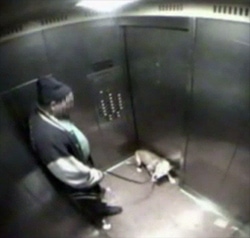 NYC Police have arrested Irving Sanchez on charges of animal cruelty after surveillance cameras recorded him abusing a dog in the elevator of his apartment building.

The 46-year-old East Harlem man can be seen repeatedly yanking the dog by its leash, throwing it about the elevator before beating it with its own leash as it cowered in fear. Police monitoring security cameras noticed the attack taking place in the Wagner Houses around 9 p.m. Sunday.

Max (the puppy) is currently in the custody of Animal Care and Control and will be available for adoption in the near future. Irving Sanchez will face charges of aggravated cruelty to animals.