Jim Turner wept in mourning at the loss of a friend last Thursday. “I say all the time it’s a wonder that these dogs have any affection,” Turner said, his voice quivering. “And Wonder will be remembered. He had value. He had worth.”

The Muncie, Indiana resident and animal behavioral consultant was emotionally exhausted from having opened his heart to a battered victim recovered from a local dog fighting bust, a dog injured so badly that ultimately, it could only be relieved by mercy. He was nameless, scarred, broken. And in his final days, he experienced love and human kindness for the first time. 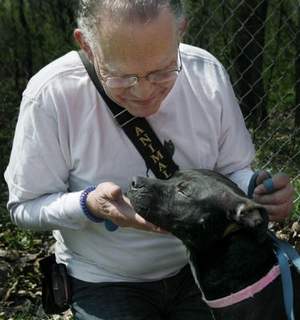 The discovery of 25 pit bulls in a Muncie home that police believe were used for dog-fighting had prompted Turner to reach out to this unfortunate soul, and against his better judgement, he fell for the dog. In an interview with the Star Press, Turner says the memory of the dog and the suffering it experienced kept him up at night. At 2 a.m., he writes a brief note:

“He had no name. What he did have was 100 scars on his face, head and body, along with 30 scabs and open wounds on his face,” Turner recited. “Sick and suffering, I took him out for fresh air. He walked on grass cautiously, as if it were a foreign surface. It was; as all he had known in his few years of existence were illegal dog-fighting rings and filthy cages where he bled and suffered alone.”

Turner named him Wonder. “Because it’s a wonder he had any affection left,” Turner said in an interview Friday.

Before he slipped away, Wonder grew close to Turner as the two spent hours together during daily visits at the Muncie Animal Shelter. Phil Peckinpaugh, superintendent of the shelter and former director of the Animal Rescue Fund, said it was remarkable to witness the bond that was formed between them in such a short time.

“That dog in particular at first was very terrified of people and didn’t trust anyone, and Jim was able to break through to the dog and they developed a real connection,” Peckinpaugh said. “Jim was actually able to lay with the dog in the kennel and pet the dog and really give him some real comfort. It was pretty amazing to witness.”

In a selfless act, Turner befriended Wonder and showered him with love and affection – and in doing so, set himself up for heartbreak. Critically wounded and unable to recover from skull fractures and infected wounds, Wonder was euthanized Wednesday at Animal Medical Center.

“I asked that I be able to hold him when they put him to sleep so I could be the last thing that he looked at,” Turner told the Star Press. “Well, that did not work out. He went to the vet and they began working with him and they knew he was going to die and that was it.”

Turner, a former Muncie police chaplain, says he’s struggling to escape the painful memories of Wonder. He laments the fact that the dog went without a faithful human companion for most of his life, but is comforted to know that in the end, Wonder experienced love, respect and friendship.

As he attended a funeral in South Bend on Thursday, Turner said his thoughts turned to Wonder and all he had endured. He flipped through the pages of the Bible, landing on Psalm 111, 4.

“… And he causes his wonders to be remembered … ,” he recited.