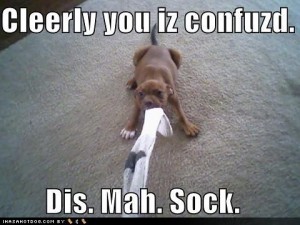 Moro, Oregon —  A Sherman County deputy sheriff is crediting a pit bull mix from California for snitching on his owner during a recent traffic stop after a marijuana and hashish stuffed sock came flying out the window of the suspect’s car.

Sgt. John Terrel had pulled over a 1998 GMW with California plates just before noon on on Feb. 9th when he noticed the flying footwear.

The defeated driver told Terrel that as he was being pulled over, he attempted to hide the sock. His pit bull mix noticed the sock and grabbed it, starting a game of tug-of-war. The dog won, throwing the drug stuffed sock out the window of the car as Terrel approached.

Sherman County Sheriff Brad Lohrey offered high praise for the playful pooch. “I wish everyone traveled with their own personal drug dog. It sure would make our job easier.”

Joel Dobrin, 32, of San Diego, was cited for possession of marijuana and hashish, and was indicted by a Sherman County grand jury and charged with possession of a controlled substance.