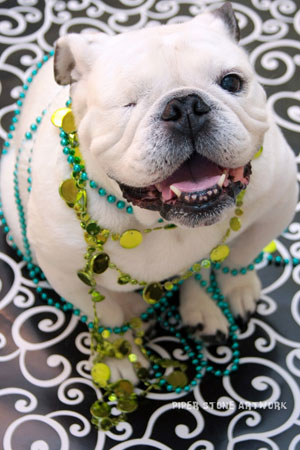 Piper’s story is both beautiful and hard to believe.  Piper is an english bulldog with one eye, and she loves to paint.  Her new life began when Mother Theresa of the San Antonio Bulldog Rescue took Piper in when she was surrendered by her owner because she was grumpy and growled at him.   At the time Piper suffered from arthritis, had a bad skin infection, and a painful hip problem.  Who wouldn’t be grumpy?

Mother Therese loved Piper and spent several months getting to know her and earning her trust.  Eventually she found her a forever home with Jessica, Jeff, and her doggie sister Roxie and that is when she discovered her true passion for painting.  Like most dogs, Piper loves car rides, probably in part because Mother Theresa used to take to her to Sonic for hot dogs, and she also loves grunting, snoring, eating, licking, drooling, and sleeping.  Jessica, her new mom, is an artist and every day Piper would eagerly accompany her to her studio and watch her paint for hours. 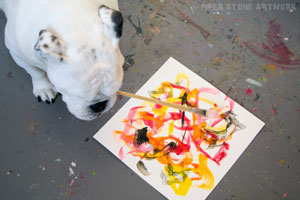 Though Piper can hardly walk a block, she will run for two things, food and the chance to paint.  One day Jessica decided to experiment, and she bought some non-toxic paint to work with.  One can imagine the carnage that might ensue from putting a wet paintbrush into a dog’s mouth, but not in Piper’s case.  She knew just what to do, and with no training she stayed in one place and began to paint while Jessica held the paper still for her. 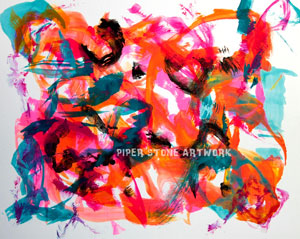 Since that day Piper has embraced her inner artist and continues to create beautiful paintings which are sold to raise money and awareness for dog rescues.   As well, as Jessica says “to show children and adults that different is beautiful and special needs beings are remarkable.”  Her paintings have been sold around the world and Piper’s work can be seen on her website and she has a Facebook page as well.  Piper is helping to show the world that beauty comes in many forms and being loved may all be one needs to blossom.