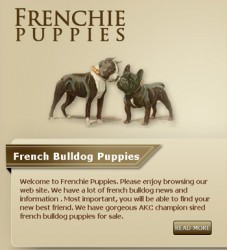 The Humane Society of the United States has submitted a complaint to Missouri Attorney General Chris Koster requesting an investigation of the purported dog “rescue” group operated by state-licensed dog breeder.

The HSUS’ complaint contends that Laymon is violating the state’s consumer protection law, also known as the Missouri Merchandising Practices Act, by deceiving the public into believing that the dogs in her operation are rescued from other facilities, when in fact many of the dogs may be coming directly from her puppy mill.

“This is only one example of the corruption that is prevalent in the high-volume dog breeding industry,” said Barbara Schmitz, Missouri state director for The Humane Society of the United States. “This puppy mill operator is not only profiting from breeding dogs in an inhumane manner, but now is also profiting by misrepresenting her operation and playing on the emotions of people who care about dogs and want to rescue them.”

The HSUS named Laymon’s breeding facility, Shadow Mountain Kennel, as one of the worst licensed puppy mills in the state in its 2010 and 2011“Missouri’s Dirty Dozen” reports. The kennel received a “dishonorable mention” in both reports based on consumer complaints about sick and dying puppies Laymon allegedly sold over the Internet, as well as USDA and state inspection records citing Laymon for numerous violations of federal and state welfare standards.

The violations included excessively matted dogs, inadequate veterinary care, and dirty housing conditions. In 2009, the USDA fined Laymon $7,125 for repeated violations and suspended her license for three years. However, Laymon continues to be licensed by the Missouri Department of Agriculture even though she has been cited by that agency at least 36 times for animal care violations.

HSUS’ complaint to the Attorney General explains that in April 2010 Laymon created the non-profit “rescue” operation, “Rescue A French Bulldog.” The “rescue” primarily operates through the website, rescueafrenchbulldog.com, where Laymon offers French Bulldogs to the public for “adoption fees” that range from $500 to $950. Laymon also uses the website to solicit “donations,” ostensibly to help feed and care for the dogs.

Based on inside information HSUS received from a former consultant of Laymon’s, it appears that Laymon created this “rescue” to entice dog-lovers into buying dogs from her facility that she might not otherwise be able to sell, and to circumvent anticipated changes in state laws regulating dog breeders. The HSUS believes this situation has become more common as consumers are becoming aware of the abuses that occur at puppy mills.