Nathan was born to a Great Dane breeder who gave the puppy up because he wasn’t perfect. 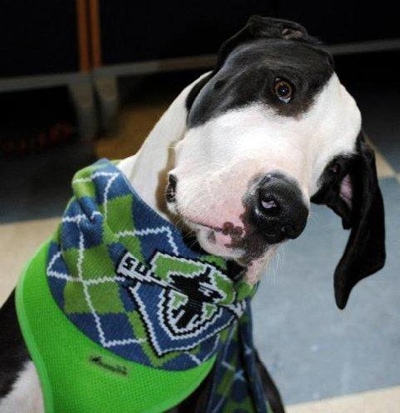 They believed his mother may have sat on him shortly after he was born, injuring his neck. He was saved from being euthanized when a last minute call was made to MEOW’s Canine Division. At six weeks old and 17 pounds, Nathan was a happy puppy, but with one complication: his head flopped to the left most of the time due to cerebellar disease.

Underwood has committed to continuing Nathan’s agility training at River Dog, a canine coaching service in Issaquah, and expects this to be a long term arrangement that suits Danny and Nathan perfectly. “They’re both mantle colored,” Starbucks says. “They are perfect little bookends.”
–end update

When excited, he circled to the left, unable to get his bearings. Holding his head in a straight position and moving forward in a straight line was nearly impossible. In every other way, Nathan was a normal, playful pup with a great appetite. Soon after his arrival, he was seen by neurologist Dr. Sean Sanders at SVS in Kirkland, who diagnosed him with cerebellar disease, which may be related to injury, birth defect or some form of disease process.

A canine coaching service in Issaquah, Washington, River Dog, has helped Nathan to improve his balance and walking with agility training. His adopter will be required to keep him in agility training for some time in order to hone his motor skills.

If you are interested in this beautiful special needs boy, please visit www.meowcatrescue.org.