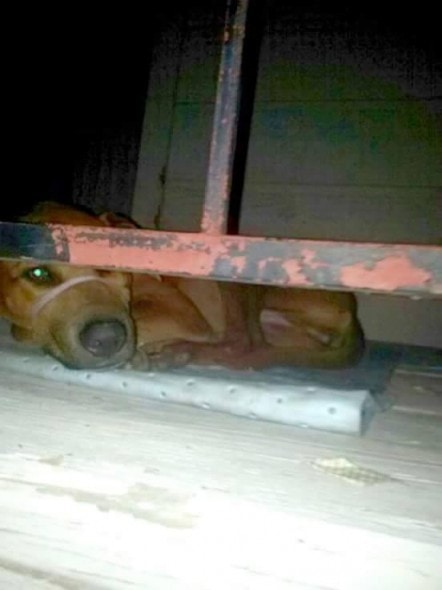 A man that lives in a Houston, Texas condo complex had enough of what was going on in the unit above him.  Someone leaves their dog out on the back patio.  The dog never gets walked or payed any attention to, and no one cleans up after him, and this neighbor had enough.

According to a Facebook post, the complaining neighbor said, “You’ve left him on that wood-plank floored porch for the past three days!  And the dog’s piss and everything else is dripping down on my head when I’m sitting on my patio.”

In response, the man decided to simply tape a diaper to the dog’s hind quarters.  To fix an issue the lazy person had with the dog crying too much while left alone, he put a rubber band around the dog’s mouth.

Once again, the Facebook page had this to say:

“Today, they were ‘decent’ enough to replace the phone cord with a thick rubber band!”

The pictures are heart breaking and just plain wrong, but the neighbors felt someone needed to do something.  After looking into things, it was discovered that the Harris County Animal Control has been called at least 14 times in relation to this particular dog.  Four different residents of the complex have complained, and according to neighbors, no one has responded.

Feeling that animal control hasn’t actually done anything to help, the neighbors called the local sheriff’s department.  Officers were dispatched to the scene, but once again, neighbors are saying that nothing was done. 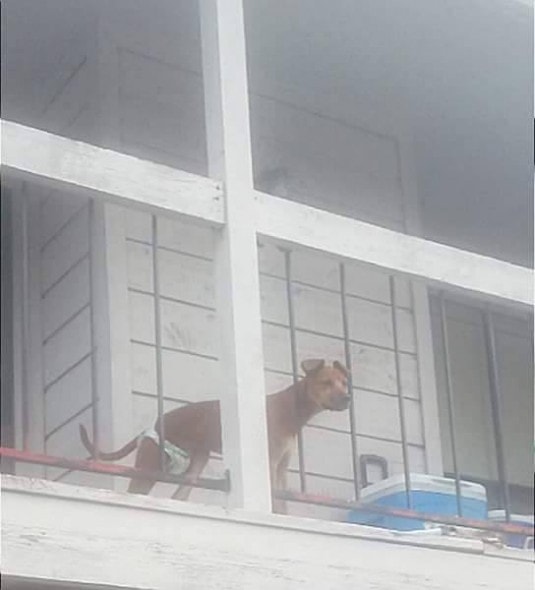 In the video included, you can hear where one of the officers does his best to minimize the neglectful person’s actions by saying, “It’s not even his dog.  He’s taking care of it for someone else.”

To which a very upset citizen responds, “Taking care of im is wrapping his mouth up?”

The officer then goes on to say that the man didn’t know anything about caring for a dog, but knows what to do now because they told him.  Then, the woman gets a lecture from the officer for complaining.

“Would you feel safe if for any reason someone came to your place, knocking on your door?” asks the cop.

At the time of this writing, it isn’t clear what, if anything, is going to be done to further assist the dog.  Local and national news agencies attempted to contact the sheriff’s department, but no one would talk, nor return any phone calls.

Stay tuned to Life With Dogs for more information as it’s reported.