Rather than spend $15-20,000 on specially bred and trained German shepherd and Belgian Malinois K-9s, a North Carolina sheriff’s office opted to accept a grant from animal rescue groups and take in two homeless pit bulls.  They had only been on the job for a week when one of them made their first meth bust!

On March 13th the Clay County Sheriff’s Office welcomed two new deputies to the department, K-9 Sarah and K-9 Phantom. K-9 Sarah and K-9 Phantom come to the department by way of a grant from the Animal Farm Foundation of New York and Universal K9 of San Antonio Texas. The two foundations have taken on the mission to show that departments do not need to spend $15-$20,000 for a pure-breed German shepherd or Belgian Malinois to search and find illegal drugs, at the same time giving dogs destined for a life in a shelter or euthanasia a second chance at life serving law enforcement officers and departments around the country. 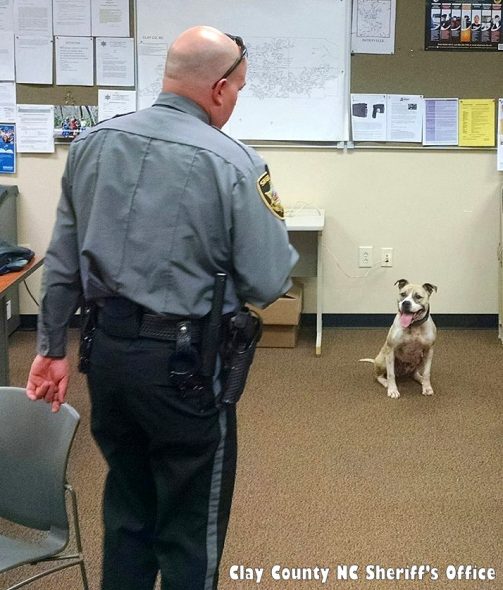 Their new partners, Deputy Chris Harper and Investigator Heath Woodard, recently attended a handlers course in Midlothian, Texas to bond with and train their new K-9 partners, as well as learn the ins and outs of narcotics detection with their new furry, four-legged partners. They trained with eight other law enforcement officers from Texas, Missouri, Oklahoma, Arkansas, and Louisiana; searching buildings, cars, packages, big rigs, and even airplanes. The course was hosted by Midlothian Police Department and was instructed by Midlothian PD K-9 Handler and Trainer Wes Keeling. Both Deputy Harper and his new K-9 Sarah and Investigator Woodard and his new K-9 Phantom have been certified by both Universal K9 and American Working Dog Association in the detection of marijuana, heroin, cocaine, methamphetamine, and MDMA, also known as ecstasy.

What will be the most shocking to some will not be that Clay County Sheriff’s has the new K-9 deputies, but rather their breed:  K-9 Sarah [tan and white] is a pit bull and K-9 Phantom [black and white] is a pit bull-Boston terrier mix.  K-9 Phantom was rescued from a shelter in Texas and K-9 Sarah was rescued from a shelter in New York, where they had spent a year looking for homes before they found a new life as police K-9s. Brad Croft of Universal K9 and Stacey Coleman of Animal Farm Foundation are trying to show the world that even though pit bulls get a bad rap in the media, they aren’t all bad dogs and can do great things for the communities they serve. K-9 Storm, who was in the class with Phantom and Sarah, was set to be euthanized if she had not been rescued the day before her euthanasia date and given a second chance at her new life being a narcotics detection dog. She now proudly serves the Red Oak Independent School District in Red Oak, Texas with her new partner, school resource officer John Julin.

Both Phantom and Sarah are only single-purpose dogs, meaning they are only trained in narcotics detection. They are not and never will be trained in criminal apprehension or bite work. No pit bull/pit bull mixes granted by Animal Farm Foundation and Universal K9 will ever be trained in bite work or criminal apprehension. They want to show the country and the world the loving and caring nature that most of us have experienced with our pit bulls and show that the pound puppies have what it takes to go up against and sometimes exceed their expensive pure-breed cousins. 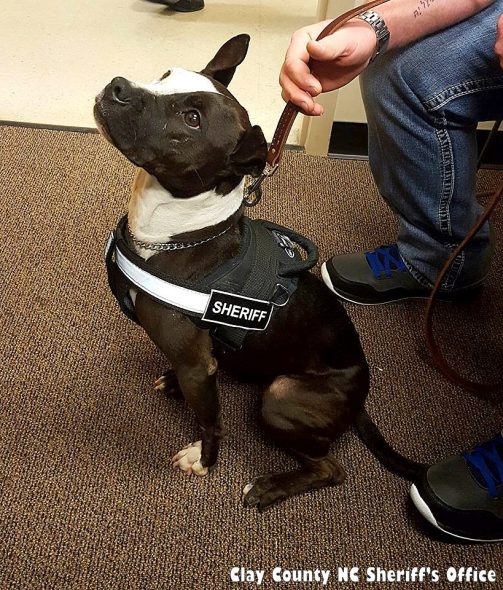 Some will wonder what the cost to the county for the new K-9s and equipment is, as any concerned taxpayer should. The K-9s themselves were free, and the training was free – all provided by grants from Animal Farm Foundation and Universal K9. The hotel, per diem, collars, leashes, harnesses, food, crates and other K-9 expenses were paid for by drug seizure money. The only money coming out of the Sheriff’s Office budget was fuel for the vehicle that was driven to Midlothian Texas and the pay for the two deputies that attended the training. So instead of paying $30-$40,000 dollars that would have been typical with most departments, the Sheriff’s Office spent a fraction of that. Also, both Sarah and Phantom are roughly one-and-a-half- to two years old, so they will have many years to serve Clay County and its residents, sniffing out illegal drugs on our streets.

The Clay County Sheriff’s Office would like to express their great gratitude to Animal Farm Foundation and Universal K9. Had it not been for their great work, both Sarah and Phantom may still be looking for their forever homes. The Sheriff’s Office would also like to thank Chief Carl Smith of Midlothian Police Department for opening his department and allowing such a great program and training to be carried out at their department. The Sheriff’s Office along with Deputy Harper and Investigator Woodard would like to personally thank K-9 handler and trainer Wes Keeling for taking many, many hours away from his family and his work to ensure that the officers in his class received the best training available.

“As always, it makes me feel proud to be able to help find productive jobs for these dogs and at the same time provides them with a new home,” Universal K9 operations director Brad Croft told The Dodo. “I visit shelters often and pit bulls fill them. The more I am able to place these dogs the more I can save. It’s really a win-win-win for the dogs, law enforcement and taxpayers.”