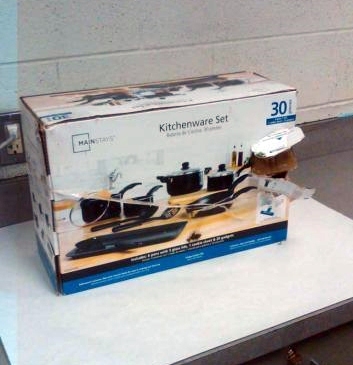 A press release states that a woman was walking her dog in an alley between 109th and 110th streets and Third and Fourth avenues and heard a sound in a pile of trash set out for collection.  Her dog became interested in sound, and when allowed to explore the trash pile, the the dog sniffed out a kitten sealed inside the cardboard box pictured above. Police have nicknamed the lucky critter ‘Jack in the box’.

Melissa Lombardo said she heard some noises coming from a pile of refuse, and thanks to her dog Phoebe’s sniffing she discovered the kitten. “I was shocked and sad. I felt bad for the cat. It was obviously scared. It was crying,” Lombardo said.

Troy Animal Control took the  8 to 10 week (month?) old kitten to the Troy Veterinary Hospital to be assessed and treated.  A vet exam states that the kitten suffered from exposure, but is expected to recover and will be kept at the facility while the investigation continues.

“The future of this cat absent the resident actually taking the time and finding the cat in the garbage, was either exposure if it would have taken a day or two for the trash to be picked up it wouldn’t have survived that long in the cold weather or the most unfortunate result would have been through the refuse collection process it would have been subject to some sort of distress trash compacting that would have been done by refuse collectors,” Captain John Cooney, Troy Police Department, said.

He also stressed that police are taking the matter seriously. “It’s just a horrible crime, it’s cruel and inhumane. Every step that we can take including a door to door canvassing of the neighborhood and probably a search of the garbage in the pile will be done in order to get some resolution to the crime that occurred here. It’s certainly a criminal investigation. The Cruelty Animal Statue which covers this type of incident is a misdemeanor but, this is going to get a little extra look. The box the cat was found in has been secured as evidence and it’s been checked for trace evidence. We’ll go as far as fingerprints, DNA evidence on the box,” Captain Cooney said.

Troy Police detectives are conducting a criminal investigation and ask anyone with information to call them at 270-4430.